Katy Perry is back with what is sure to be one of the best-selling records of the year. With production and songwriting contributions by several of the biggest names in pop, there is no denying its professionalism and polish. But the light that passes through Perry’s Prism is fractured at best.

A quick glance at the song titles might lead some to suspect that Perry may be returning to the faith of her childhood. A closer listen, however, reveals carefully crafted and expertly produced pop music of the most spiritually subversive type. It’s largely hedonistic overall, an attempt to inspire her audience to empower themselves through partying and making out. Unlike Teenage Dream, however, there are several very personal and reflective tunes here that do much to humanize an artist who has seemed like something from the Cartoon Network ever since she “Kissed a Girl.” Sure, Perry’s fare seems tame compared to the sleazy Miley Cyrus antics of late and the gratingly amoral and dehumanizing Artpop of Lady Gaga, but wholesome it certainly is not.

“Roar,” the album’s first single, is an anthem to personal empowerment wrapped in a tightly produced package that channels a variety of zeitgeist elements (chants, whelps and swampy reverb). It’s Mumford-meets-Florence perfection and, while not particularly spiritual, certainly positive and uplifting. Next up, however, is “Legendary Lovers,” a track in which Eastern meditation and the Gospel are equally co-opted in a frighteningly catchy ode to sex:

Under a silver moon, tropical temperature,
I feel my lotus bloom, come closer.
I want your energy, I want your aura,
you are my destiny, my mantra.

I never knew I could see something so clearly looking through my third eye
I never knew karma could be so rewarding and bring me to your light
Maybe this is the beginning of something so magical tonight, ah, ah

“Birthday,” like most of the songs on the record, leaves nothing to the imagination. Innuendo this heavy requires a special amount of childishness to stomach. By the time she gets to the breathy “Happy Birthday” at the bridge and says, “Let me get you in your birthday suit, it’s time to bring out the big balloons,” the best you can do is laugh. The track, though? Catchy as sin. Same goes for most of the album. Perry and her producers explore a much wider range of pop textures than most current blockbusters. R&B and rap are here, but not as dominant musical themes. The tracks are full of interesting sounds, the vocals are recorded in a very human way and the hooks are deadly.

The epic “By the Grace of God” is a stirring piano ballad that catalogs the emotional aftermath of Perry’s divorce from comedian Russell Brand. Name-checking God is as spiritual as the track gets, though. For the most part it is a simple, encouraging journal entry about surviving heartbreak and depression. It is followed, however, by “Spiritual,” a song that uses Gospel imagery to depict the ecstasy of, you guessed it, sex.

There is no image too sacred for Perry to use for her own purposes. Her spiritual vocabulary is rich indeed, but it seems to point to a hodgepodge of motivational philosophy and hedonism that is completely disconnected from anything having to do with the Gospel. Perry’s is a sadly self-centered spirituality in which every hunger is worth satisfying. There’s no doubt she is extremely talented, it’s just too bad she can’t seem to connect to the truth and power behind the religious images she so deftly misappropriates.

Perry’s is a sadly self-centered spirituality in which every hunger is worth satisfying.

“JJT” has been chasing the thread dangling between eternal truths and temporal creative experiences for nearly three decades. He is a writer, a businessman, a father, an artist and a seeker. Read more about him at JohnJThompson.com. / Image courtesy of Capitol Records, with illustration by Jerod Clark. 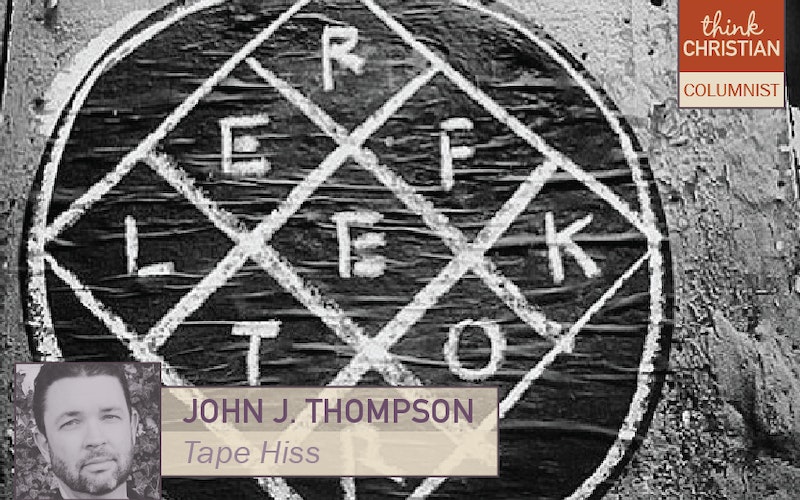