As he did in his debut film, The Witch, director Robert Eggers fills The Lighthouse with rich and sometimes incomprehensible language (this time he wrote the script alongside his brother Max). Wake speaks in pirate cant, leading the mainlander Winslow in sea shanties and invoking Triton and Poseidon in his ornate curses. While the movie takes pleasure in its speech, there’s not much joy here for the characters. Outside of their mermaid fantasies and drinking sessions, Wake and Winslow are antagonists trapped on a tiny bit of rock.

Set in a small New England outpost in the 1890s, The Lighthouse chronicles the troubled tenure of two keepers (or “wickies,” in sailor parlance) caught in close quarters. Shot in boxy, 1.19:1 aspect ratio, the movie constantly reminds us of the cramped space in which the two men live. The sharp black-and-white cinematography highlights every jagged object around them, whether it be the cliffs on the island’s edge or the cheekbones jutting out from above Wake’s unkempt beard. As the incessantly bellowing foghorn reminds us, this is dangerous ground. It’s best to stay away.

The lone bit of hope comes from the glow of the lighthouse, which we only see in psychedelic glimpses. A former lumberjack, Winslow came to the island hoping that he could experience that light, but the older man immediately bars him from entering the top of the tower. Instead, he assigns Winslow grueling manual labor—dragging supplies to the top of the tower, lugging rocks across the island, and so on. Wake watches, recording his impressions in a book that serves as a report to some unseen higher power.

Classical literature scholars will notice parallels between the movie and the Greek Prometheus myth. But Christian viewers might feel a different, unwelcome tinge of recognition. Guilty people trapped in an inhospitable place? A taskmaster who keeps searchers from the light? Constant reminders of past failings? The Lighthouse often feels like a vision of Hell.

This is dangerous ground. It’s best to stay away.

While there are about as many doctrines of Hell as there are Christian denominations, there are some constants: Hell is a place for those who are separated from God, where accusation and punishment replace God’s grace and goodness. In the film, this punishment takes the form of physical labor. For all the supernatural phenomena that occurs—everything from tempestuous sirens to an unnaturally troublesome seagull—The Lighthouse is a movie about bodies. These men fart and sweat and bleed; they fight each other viciously and they embrace each other tenderly. Eggers repeatedly trains his camera on Pattinson’s frame as Winslow trudges up muddy hills or stands in shock when the wind blows disposed excrement back into his face. These scenes often end with the broken Winslow standing in dejection as Wake sits in the foreground, quietly recording judgments into his book.

Wake’s assessments matter because he’s Winslow’s only access to the light. Whenever the camera follows Winslow climbing up toward that goal, it looks at him through grates and around machinery, reminding us of the many barriers between him and the beauty he hopes to obtain. For Christian viewers, Winslow’s longing for the light holds special resonance. The gospel and epistles of John use light as a metaphor for God as revealed through Christ. In Christ, the gospel declares, “was life, and that life was the light of all mankind. The light shines in the darkness, and the darkness has not overcome it.” John’s first epistle applies this imagery to Christians, arguing that “if we walk in the light, as he is in the light, we have fellowship with one another, and the blood of Jesus, his Son, purifies us from all sin.”

The Lighthouse shows us the opposite of walking in the light, as Wake’s role as lightkeeper renders that light horrific. When seen through Winslow’s perspective, the lighthouse becomes a place of monsters, where tentacles slither and where Wake transfigures into something unholy and strange. Because of his insistence on accusation and exclusion, Wake transforms a beautiful structure, designed to save lives, into a place of terror.

Christians run the risk of doing the same, of using our knowledge of Christ’s teachings as a tool to harm others, of understanding our own salvation by pointing out the shortcomings of our fellow humans. When we do this, we make God look like a monster and Jesus look like a madman. We consign others to a Hell of endless labor and accusation.

But as much as its vision of work without reward and guilt without forgiveness brings to mind Hell, hints of heaven can be found in the shadows of The Lighthouse. The movie may suggest that Hell is other people, but theologian Catherine Keller believes that heaven can manifest in the same way. Her exegeses of John’s gospel and first epistle emphasize the fact that the Word that was God took a body in the form of Jesus, who in turn showed humans how to become “children of God.” Jesus reveals to us a “relational capacity” Keller argues, and not a “natural or supernatural status.” Likewise, John 1 may be read as “announcing ... the logos, principium, word, of all materialiation”—making the work of God something to be done in bodies on the earth.

In other words, Keller contends that our bodies, and our relation to others’ bodies, make real God’s Kingdom on Earth. Our bodies matter as bearers of God’s image, as the means by which we show God’s love for humanity. In contrast, when Wake and Winslow batter each others’ bodies, they create a Hell that obscures the lifesaving light.

The Lighthouse reveals the horror of hoarding and distorting the light of life, and thereby warns us away from that rock of damnation. Christians are called to shine a different type of light, one that illuminates the rock of forgiveness. 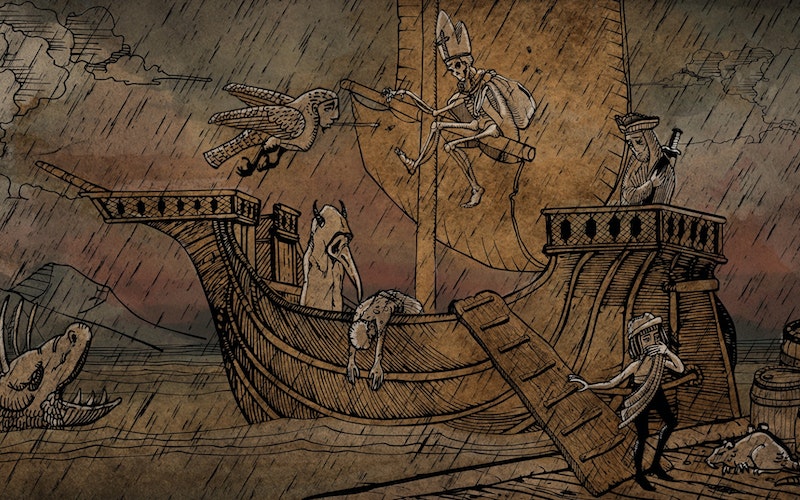