In the new Western TV series, evil seeks to spread from one generation to the next.

When I was a boy, I was captivated by tales of the American West. I watched every episode of Bonanza and The Lone Ranger before eventually graduating to more sophisticated fare like The Searchers and The Man Who Shot Liberty Valance—movies which deconstructed the mythologies I had come to love.

I was fascinated by the grandeur and restlessness of a beautiful horse. I was intrigued that good guys wore white hats and bad guys wore black ones. And I was entranced by the vastness of the western landscapes—by the freedom and instability those vistas encompassed. But I discovered early on that the instinct to romanticize the Wild Wild West was misguided. In the films and television shows I loved, more was happening than met the eye. Matters of race and questions of violence haunted these stories and it became clear to me that what made them truly valuable was the complicated nature of their characters.

This is true of Netflix's Western series Godless, created by Scott Frank. In some ways Godless is a classic Western, full of familiar archetypes and homages to famous predecessors. But it’s also a story about the ways sin can become familiar and attractive, and how the fight against it demands constancy.

Godless tells the story of diabolical outlaw Frank Griffin (Jeff Daniels, in a remarkable transformation) and his relationship with his adopted son, Roy Goode (Jack O’Connell). As a boy, Griffin had been adopted by a murderous outlaw named Mr. Haight, whose gang had killed Griffin's family. The aptly named Haight taught young Griffin to “love with the stick, and the bullwhip, and the knife.” And he raised Griffin to be a killer.

Years later, Griffin followed suit when he took in Roy, then an orphan, promising him a home, a family (albeit a brotherhood of bandits), and a purpose. To young Roy, Griffin was a savior and a hero, someone to look up to and imitate. But as time passes, Roy's eyes are opened to Griffin's devilish side. Griffin can be charming when he wants to be; he can even be loving when he chooses to be. But whatever evil took hold of him as a child under the tutelage of Mr. Haight eventually metastasized into a bloodthirsty quest for power.

Godless captures how sin can become familiar and attractive, and how the fight against it demands constancy.

Much of this backstory is told by Griffin himself in the manner of fireside spiritual ramblings. He fancies himself a man of God, a justice-keeper, a prophet, and he’s made to look larger than life. He’s often framed in extreme, low-angle shots, emphasizing his Citizen Kane-like dominance. In these fireside conversations we also see hints of humanity, but as he continues to talk his true heart is revealed. Griffin is reminiscent of C.S. Lewis’ observation, in Mere Christianity, that “a moderately bad man knows he is not very good: a thoroughly bad man thinks he is all right.”

Roy Goode's journey is different. As the series starts, he has abandoned Griffin's gang and hunkered down on a ranch near La Belle, New Mexico, a village mysteriously made up almost exclusively of women and children. Enraged, Griffin tracks Roy down, only to run into a cadre of La Belle’s fearless defenders. This being a Western, a good old-fashioned shootout ensues.

And yet, Roy Goode isn’t a true White Hat. He wants to be the good guy, but the temptation to wear the black hat persists. Its allure is intoxicating and its effects myriad. Roy is more akin to Lewis’ “moderately bad man,” even if he is one who wishes to be better. This, of course, is easier said than done.

Like the titular character of the classic Western Shane, Roy has grown disturbed by the power of the gun and seeks to avoid violence. And he finds in the town of La Belle and the people who live there a chance at reinvention—redemption, even. The question is whether he will truly and completely turn his back on the transgressions that defined his youth (the sins of his father). Or will he, like the man who took him in years before, allow himself to be fully corrupted?

Such spiritual dilemmas have long driven the Great American Western. In these tales, the vistas are wide and wild, the creatures that live in them are restless and unbroken, and beyond any hill godlessness might reign. But the vast and untamed spaces also offer a place to start over, to shake free of the burdens of the past, and to create a new and generative life in fertile, open country. As the Apostle Paul wrote, “where sin increased, grace increased all the more.” Or as Kevin Costner said in another famous Western, “It seems every day ends with a miracle here.”

David Kern is multimedia director for the CiRCE Institute and the host of Close Reads, a book-club podcast for the incurable reader, and Forma, an interview podcast about classical and Christian education. He and his family live in North Carolina. 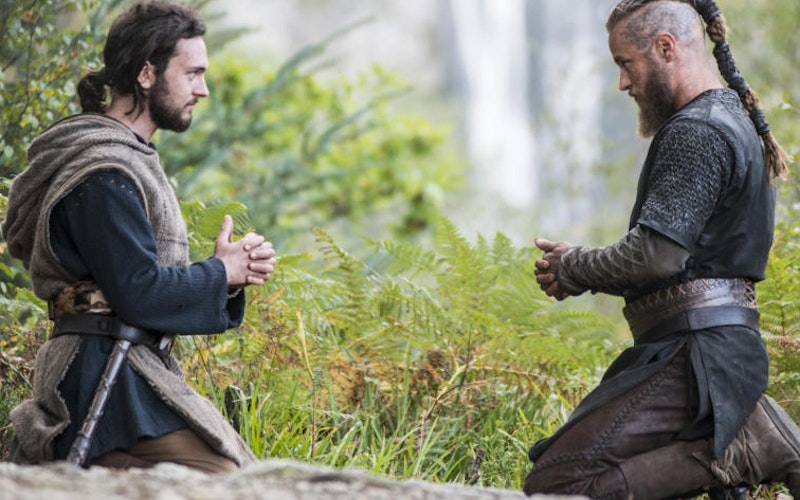 Vikings: Grace Given, Rejected, and Received