Jeremiah’s cameo in the Jordan Peele horror film is all part of a prophetic plan.

Very early in Us, the follow-up to Jordan Peele’s breakthrough horror film Get Out, a little girl walks through a carnival and sees a scraggly man holding a sign that reads “Jeremiah 11:11.” That Old Testament passage employs language fitting for a scary movie: “Therefore this is what the Lord says: ‘I will bring on them a disaster they cannot escape. Although they cry out to me, I will not listen to them.’”

What follows—and I’ll avoid spoilers until later in this post—is disastrous indeed. Vacationing at their summer home, an affluent family of four receives a late-night visit from malevolent doppelgangers in matching red jumpsuits: a mother, father, teen daughter, and younger son. They look like the family (indeed, they’re played by the same actors: Lupita Nyong’o, Duke Wilson, Shahadi Wright Joseph, and Evan Alex), but they have wild expressions and speak in hoarse gasps and guttural moans. The boy scampers about like a crab, while the mother has the elegantly hitched gait of a ballerina whose limbs have been broken. What is going on, and what does Jeremiah 11:11 have to do with it? (The digits 11:11 appear a few more times in the film, including as the score to a baseball game and the time on a digital clock.)

Well, let’s start with the fact that the prophets were alarming figures. They’re not pastors meant to minister, but rabble rousers meant to shock. In the Bible, more often than not, prophets call God’s people out of their sinful stupor, lest they face awful consequences. Jeremiah, once he got over his youthful fear of speaking, delivered harsh pronouncements of God’s judgment on the nation of Judah for its idolatrous ways and ultimately foretold Jerusalem’s fall to Babylon.

Jeremiah is known as the “weeping prophet” because of the emotional tenor of his proclamations. It’s interesting that in Us, as in Get Out, tears are a recurring visual motif. Peele frequently employs stark close-ups, in which the actors look directly into the camera, often while they’re crying. Handcuffed to a coffee table, Adelaide, the vacationing mother played by Nyong’o, lets out tears of terror as she gazes into the familiar face that has imprisoned her. There are moments in which Red, her shadow counterpart, weeps as well. Beyond the surface-level horrors of the story, what is it that Us is lamenting? (Here come the spoilers.)

Prophets were not pastors meant to minister, but rabble rousers meant to shock.

Following the movie’s prophet imagery—and that Jeremiah 11:11 sign appears yet again later in the film, in the hands of a dying man being lifted into an ambulance—I began to consider what great sin the movie might be denouncing. I’d suggest it’s American consumerism and the exploitative economics that enable it.

It turns out that Red and her “family” aren’t the only shadow people. We eventually learn that doppelgangers were created in underground labs decades ago across the United States, designed by unnamed conspirators to control the shadows’ above-ground counterparts like puppets. When the experiment failed, the shadows were abandoned, left to survive far below the earth on nothing but the white lab rabbits that were also being kept in cages. (In that early conversation, Red says that while Adelaide enjoyed delicious meals above ground, she had only raw rabbit to eat.)

As such, the shadows are something of a stand-in for those who suffer in order for others to prosper. Adelaide and her family live a good life, with two houses, cars, a boat, and—like many of us—smartphones and plentiful wardrobes. Are Red and the other shadows reminders of those miners in developing countries risking their lives for phone materials or sweatshop laborers cranking out clothes in dangerous conditions? Are those rabbits a nod to animal testing for luxury items such as cosmetics and hair-care products? If that all seems like a stretch, consider that Hands Across America—a 1986 charity project intended to fight poverty—makes an ironic appearance in the film as well. (I’ll leave those details for you to discover.)

Then there is the movie’s final twist, which harkens back to that opening sequence I mentioned. The little girl at the start of the film is Adelaide in 1986. At the carnival, she walks into a hall of mirrors, where she briefly encounters her shadow self. It’s a traumatizing incident (like Jeremiah, Adelaide has trouble speaking afterwards) and she’s repressed most of it as an adult. At least she fails to remember much until the film’s final moments, after Adelaide has brutally murdered Red and reunited with her own family. Driving to safety, she has a clarifying memory: during that childhood meeting, the shadow kidnapped the “real” girl and switched places with her. She then suppressed this act in her mind and went on to live a prosperous life. And so Red became Adelaide, while Adelaide grew up to become the vengeful Red.

Us ultimately suggests that prosperity at the expense of others can lead to insidious complacency. We not only forget the plight of the less fortunate in pursuit of our own comfort, but also our own identity as servants in the kingdom of God. We prioritize the newest and best for ourselves over the needs of “the least of these.” Some might call Us’ final scene a silly gotcha twist, but I prefer to think of it as prophetic. 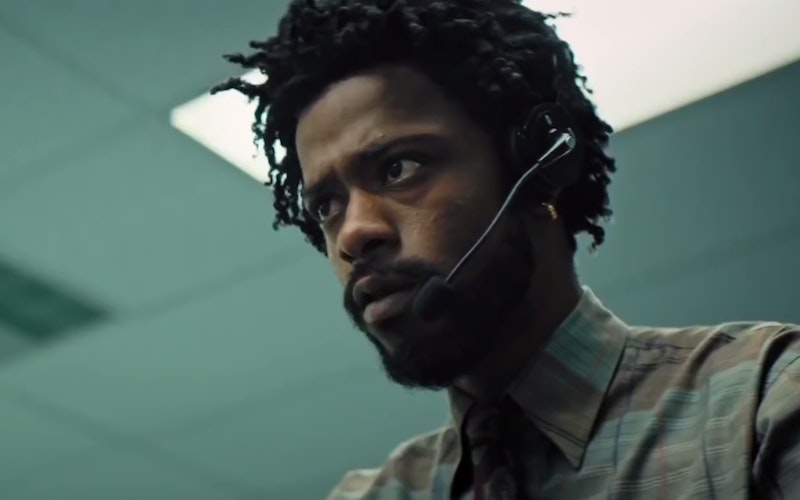 Taking Voice Lessons From Sorry to Bother You