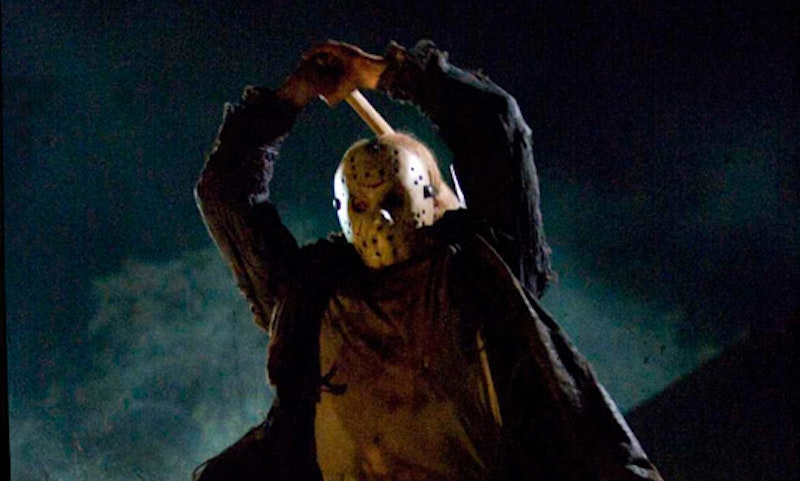 Do slasher flicks have anything to offer Christian moviegoers?

I believe that movies, even secular ones, are often holy experiences – God-directed expressions of the human experience, much like prayer. But where do bloody, exploitative horror films fit within this philosophy?

I ask because this weekend marks a new era in the “Friday the 13th” horror franchise. On Friday – yes, the 13th – Warner Bros. Pictures delivers a remake of the original 1980 fright fest (which has already spawned 10 sequels).

The irony is that these movies have a puritanical sense of morality. In the “Friday the 13th” pictures - and also in “Halloween,”“A Nightmare on Elm Street” and other movies of the era - the victims are almost always promiscuous, pot-smoking teens who are punished for their partying ways by a deranged madman. Put together, the films comprise a demented scare campaign that demonizes drugs and promotes abstinence.

That tradition continues with the new “Friday the 13th,” which purports to be a remake of the original film but is really just another exercise in sex and death. The picture opens with a bunch of campers who are hiking near Crystal Lake, ground zero for the horror series. After stumbling across a field of marijuana plants and celebrating with some extramarital hanky panky, good old Jason Voorhees arrives on the scene with a machete to punish them for their debauchery.

Even if you buy into such movies as moral parables – and considering all the nudity going on I’d say they’re more hypocritical than moral – I don’t think you could honestly argue that this makes them, in any sense of the word, holy.

When I was a full-time movie critic – meaning I had to see every new release, no matter how soulless – I often struggled with how to handle slasher flicks, especially the new generation of torture-themed pictures such as “Saw” and “Hostel.” As a Christian, how should I respond to them?

I suppose some might say that these pictures depict the darkest side of humanity – what a soul is capable of when he or she has completely rejected God. But what is the virtue of recognizing such a thing? That this sort of awareness can send us running into His arms in fear?

More valuable, I’d argue, is the way some horror movies work as effective allegories. They depict an extreme, exaggerated situation to make us recognize the horrors we’ve come to accept in real life. For some reason, zombie flicks often work this way, from the segregation subtext of 1968’s “Night of the Living Dead” to the Iraq war parallels of 2007’s “28 Weeks Later.”

But do these allegories justify the cruelty and violence that is the genre’s bread and butter? Is viewing the movies this way a case of trying to make the end justify the means?

These are questions I still haven’t answered, even though I continue to dabble in horror films here and there. (“Let the Right One in,” a Swedish vampire flick, nearly made my 2008 top ten list.)

For anyone else who watches these movies – and I know you’re out there – can you help me out with a reasonable defense?