In the Amazon Prime fantasy series, we see a reflection of what it means to live in anticipation of Christ’s return.

“The Dragon has been born again. And it’s one of you.”

In the Amazon Prime epic fantasy series The Wheel of Time, these words are spoken to a scared group of teens as their village, the Twin Rivers, burns in the background. Delivered by Moiraine, a member of the Aes Sedai (played by the captivating Rosamund Pike), this pronouncement is followed by Moiraine's charge to follow her on a journey to fight against the Dark One. Thereafter five teens—Rand al’Thor, Egwene al’Vere, Perrin Aybara, Mat Cauthon, and Nynaeve al’Meara—are thrown into a reality they never knew existed: a world of magic and threats, of life and death, of a promised savior and an evil foe. Moiraine tells them that they each have an important role to play in the return of the Dragon reborn. One of them will defeat the Dark One; the others will make great sacrifices along the way.

Adapted from the book series by Robert Jordan and Brandon Sanderson, the show focuses on these five friends as they resist their new calling. In doing so, The Wheel of Time elucidates the very human struggle of embracing new realities and finding our place in the world.

Though heroism and greatness are knocking at their door, the protagonists are quick to second-guess their roles. Egwene (Madeleine Madden), Nynaeve (Zoe Robins), and Rand (Josha Stradowski) are learning to channel and thereby harness the energy of the One Power. Perrin (Marcus Rutherford) is becoming a wolfbrother—developing a kinship with wolves and gaining wolf-life characteristics, such as better vision. Mat (Barney Harris), meanwhile, has a growing connection to dark power, eventually enabling him to manipulate possibilities and future outcomes. Yet even as their abilities grow, the teens keep secrets from Moiraine, distrusting her and defying her orders. Oftentimes, they just want to go home. Their struggle is personal. They miss their families. They have growing love interests. There is a latent nostalgia for life the way it was before their knowledge of terrifying Trollocs and devious Dark Friends.

The new reality of the Dragon Reborn, however, is forced on them, whether they want it or not. In Episode 5, Egwene and Perrin are captured by Children of the Light—antagonists to the Aes Sedai and anyone who channels the One Power. They are tortured by Eamon Valda (Abdul Salis), who wears a chain of rings from the Aes Sedai he has already killed. While gagged and tied, Egwene and Perrin first practice their magical abilities. As Valda begins running his blade down Perrin’s back, his flesh splitting open and blood dripping to the floor, Egwene sits bound to a chair, pleading for him to stop. Then she stops. Her face grows serious as if she’s in a trance and she utters a single word, “Drift.” Lights flicker in the tent behind her as the One Power enters her body, circling around her in golden streams. She throws a ball of light at Valda and simultaneously releases Perrin from his bonds. He attacks Valda in a wolflike state, his eyes yellow and a guttural growl releasing from his chest. As they make their way to safety, Egwene and Perrin realize the absolute need for their gifts to survive.

The Wheel of Time elucidates the very human struggle of embracing new realities and finding our place in the world.

Embracing one’s calling in the time of the Dragon born is akin to Christians living in anticipation of Christ’s return. Unlike in The Wheel of Time—where only a few Aes Sedai (an elite group of women who can channel the One Power) can glimpse time and space—God has laid out for us in his word a clear history and trajectory: Jesus will return and we must be ready.

2 Peter 3 instructs us how we ought to live in the present, while awaiting the coming of the day of the Lord. Peter first warns against the lies of false teachers, who deny such a day is coming. Then he reminds his readers that the day of the Lord will come unexpectedly, “like a thief.” There is an imminency to this day. Finally, Peter spends the rest of the chapter mapping out what kind of people we should be as we wait. We are to “live holy and godly lives” and “make every effort to be found spotless, blameless, and at peace with [Jesus].” We should also be on our guard so that we don’t become carried away “by the error of the lawless.” In other words, instead of apathy, we should place great emphasis and significance on Christ’s return. Instead of passivity, we should proactively await his second coming.

The coming of the Lord is inevitable. It will happen. His return will usher in a new heaven and new earth and, on that day, each of us will be divided into those who were prepared and those who were not—those who longed for eternity in our hearts and those who ignored that the second coming was even a reality. This division between people is well-characterized in The Wheel of Time. In Episode 6, the moment finally comes for the teens of the Twin Rivers to embrace their roles in the return of the Dragon reborn. Moiraine opens a passage to the Eye of the World (where the Dark One is imprisoned) and tells them there is no going back. Ultimately, four of the friends follow Moiraine.

As the series comes to its climax, the remaining teens develop their gifts in the ultimate battle of good versus evil, their calling and roles now clear. Perrin uses his wolf-like eyes to read from a faraway tablet in dim light and guide his friends to safety. Egwene and Nynaeve join other female Channelers to fight an army of Trollocs. Rand fights against the Dark One himself in a battle of wits. 2 Peter 3 challenges us to “look forward to the day of God and speed its coming.” If we are truly living in anticipation of Jesus’ return, it will impact the way we live now. Like the teens in The Wheel of Time, we must leave our old way of life behind. The memory of our former selves, like the ignorant kids of the Twin Rivers, must fade away so we can become fully present in our new callings and live within the reality of the Second Coming. 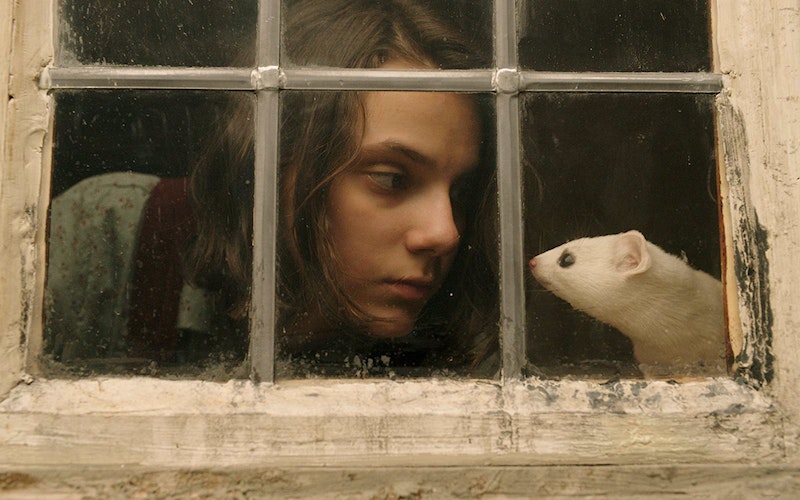 Visualizing the Soul in His Dark Materials