Those complaining about the boy Yahweh in Exodus: Gods and Kings are overlooking both the Biblical text and the movie's New Testament touch.

If you’re making a big-budget Moses movie, with all of Hollywood’s resources at your disposal, you can do better than a burning bush. And so, although the bush of the Bible does make an appearance, Exodus: Gods and Kings offers an additional visual representation of God. And that choice has already resulted in some grumbling.

When Moses (Christian Bale) encounters God on Horeb, He appears in the form of a somber little boy. As in the Bible, there are times when this presence seems to represent an angel of God and others when it seems to be the actual voice of Yahweh. (The boy identifies himself at one point as “I Am.”) Most pointedly, this is not a sweet kid. He unleashes the plagues with a petulant scowl, and when Moses questions the tactic the boy replies, “I want to see them on their knees begging for it to stop.”

In some ways, then, Exodus: Gods and Kings plays like Hebrews in the hands of an angry God. And I’m fine with that. In fact, I found this boy Yahweh to be the only compelling element in a picture that’s mostly a CGI-heavy chore, with occasional bursts of spectacle silliness. Why? Well, partly because it’s a clever bit of ironic contrast. (Who would expect a cosmic being to reveal Himself this way?) And partly because the young actor, Isaac Andrews, is amusingly impudent in the part. But mostly it doesn’t bother me because it’s Biblical.

God’s anger is an elemental part of the Book of Exodus, something I was reminded of while listening to a recent series of podcasts on Groundwork, a sister program of Think Christian. While working through the Moses narrative, co-hosts Dave Bast and Scott Hoezee were sure to emphasize the overall arc of the story as one of rescue and salvation (“costly salvation,” in Hoezee’s words). Yet they also spent time wrestling with the reality of God’s righteous anger.

Exodus: Gods and Kings makes us sit with this angry God, just as the Biblical text does.

“If there is one truth the Bible emphasizes about God, it is that He will not be mocked,” Bast said in the episode entitled “Israel’s Deliverance.” “He will not be shown up in any way.” Noting Pharaoh’s hubris and dismissiveness towards Yahweh, even after the arrival of the plagues, Bast characterized the showdown in Exodus as “a power struggle with the gods of Egypt.”

Exodus: Gods and Kings makes us sit with this angry God, just as the Biblical text does. That we’re uncomfortable with it has less to do with the movie offering a “false portrayal,” I suspect, and more to do with our modern hesitance to consider ourselves (or anyone else) as deserving of God’s judgment. God’s justifiable anger is passé. Grace is the language of the day.

That’s how it should be (and ultimately will be), as we know from the Good News of the New Testament. In fact, something the Christian critics of Exodus: Gods and Kings are missing is that it has a New Testament touch. After the Israelites have escaped Pharaoh for good, there is a scene of Moses and the boy Yahweh in a cave, where Moses is etching the Ten Commandments onto stone. In a delightful little detail, the boy is making Moses tea. Even more Christological is a quick shot later on, when Moses looks out at the crowd of Israelites marching through the desert and sees the boy tromping among them in the dust, a smile on his face. It’s a glimpse of Immanuel, God with us.

On Groundwork, Dave Bast referenced another name for Christ, one He gave Himself in John 8:58: “Before Abraham was born, I Am!” This is a callback, of course, to Moses’ encounter with God at the burning bush. Never mind the CGI plagues, expansive Egyptian sets and hundreds of extras. That Exodus: Gods and Kings manages to evoke this Gospel trajectory – from God’s legitimate anger to His enduring grace - is the movie’s most remarkable achievement.

Josh Larsen is editor of Think Christian. He also writes about movies at LarsenOnFilm and is the co-host of Filmspotting. Connect with him on Facebook, Twitter and Letterboxd. / Image via Twentieth Century Fox, with ilustration by Jerod Clark. 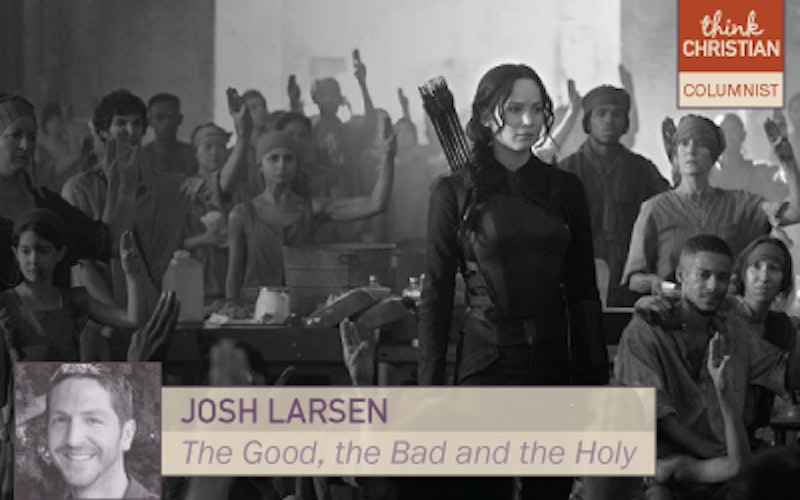