To reduce the World Cup to a cultural thermometer is to torture creation into telling us what we want to hear.

The World Cup reaps its harvest in summertime. With each Cup, a fresh crop of fans spring from the earth like overnight mushrooms. Every fourth summer, flags and patriotic t-shirts and beach towels are snappily unfurled from dormancy. After the Olympics, this is the golden hour of international unfurling.

In addition to all the fair weather patriot-fans, the World Cup elicits its share of soccer critics, particularly in America. As a genuine (if backsliding) curmudgeon, I can relate to this phenomenon. Soccer critics find themselves facing north on a southbound hipster train, and in their distress they cry out to the Internet.

One critic is Stephen H. Webb. Five years ago Webb wrote in the Wall Street Journal that “Soccer is Ruining America.” Webb remains staunchly - indeed, heroically - anti-soccer, as he explains in a recent piece for Politico, “How Soccer is Un-American.”

In a somewhat joking way, Webb enumerates a long list of soccer’s abuses against nature. In Webb’s view, soccer contradicts the grain of optimistic American culture. He sees it as a dismal, tragic sport, invented by Samuel Beckett in some Prussian charnel house, smuggled across the moonlit Atlantic in dank steamer trunks and unleashed in Pandoran fashion on America’s unsuspecting families. Surprisingly, this line of reasoning gets Webb a lot of backlash.

Some of Webb’s argument depends on what is either ignorance or glibness about the history and nature of soccer. According to Slate, soccer actually had a thriving presence in American culture in the early 20th century. In the 1920s, the American Soccer League had plenty of fans, players of international repute and great success. But when the stock market crashed, soccer’s industrial infrastructure fell apart. Soccer failed to catch on in America because of the Great Depression, not because of some quintessential national inoculation against “tragic” sports.

It is a mistake to reduce sports to a cultural thermometer.

Webb’s analysis of soccer closely resembles a notorious 1996 essay in The Weekly Standard. Where Webb finds grim tragedy in soccer, Frank Cannon and Richard Lessner described the sport as a product of European nihilism, “a metaphor for the meaninglessness of life.”

Certainly, a culture’s taste in sports can reveal something of its character. Personally, I am increasingly troubled by the gladiatorial culture of the National Football League, and by the fact that so many people around me are untroubled.

But it is a mistake, I think, to reduce sports to a cultural thermometer. Before they are machines for profit, sources of personal meaning or indicators of cultural character, sports are games made for pleasure. And pleasure in what is beautiful never needs justification, despite the crooked human heart’s propensity to go astray in its pursuits. Last October, the United States men’s team beat Panama 3-2 in an unforgettable qualifier, scoring two late goals to save Mexico’s World Cup hopes at Panama’s expense. I was staggered by the scenes of American players crouching down to hug and console the devastated Panamanian players. Soccer is most beautiful when it is most humane.

The love of beauty implies latitude of being. All creatures experience the gap between what things are and what Christ calls them to be. Christ makes us free and encourages us - endows us with courage - to let that gap articulate itself. To say a sport is “about” this or that is to distrust Christ’s freedom as it is embodied in human culture-making. It is to torture creation into telling us what we want to hear.

The final word on what is and what can be belongs to Christ, not me. Let me not commandeer a monologue out of the polyphony of being. Let the World Cup speak.

Jonathan Miles is an amateur cartographer and a gregarious hermit. He lives in Lynchburg, Va. / Photo of Croatia vs. Scotland in 2013 preliminaries via Shutterstock. 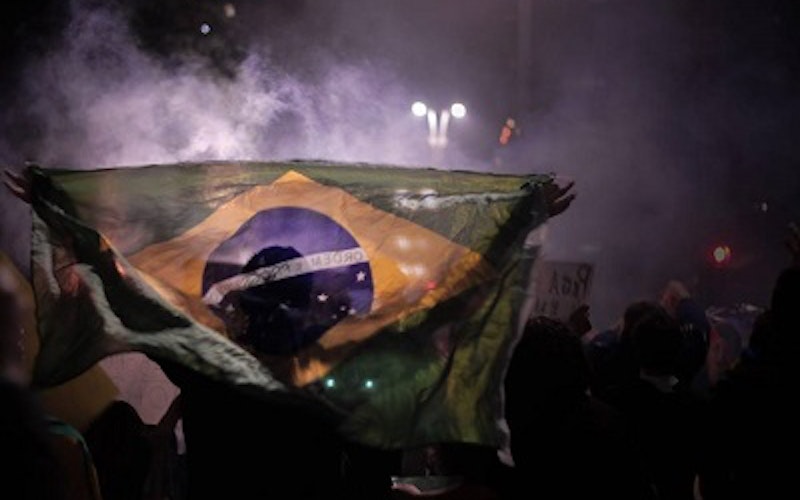