Did you know that the members of U2 are Christians and that they frequently explore issues of faith in their songs? Shocking, right? I know!

A recent BuzzFeed piece got way too many views with the irritating title “11 Bands You Might Not Realize Are Christian.” Author Matthew Perpetua seems to be trying to “out” people of faith in the music world by making over-reaching assumptions about the members’ beliefs based on lyric snippets and his own editorializations. For Perpetua, it seems the inclusion of any kind of Biblical imagery is reason enough to identify a band as “Christian.” In addition to listing U2 in the No. 1 spot, he includes Black Sabbath, Mumford and Sons, The Avett Brothers, Evanescence, Belle and Sebastian, Lenny Kravitz, Kings of Leon, Sufjan Stevens, The Civil Wars and the incredible Black Rebel Motorcycle Club, who just released an excellent new album, Spectre at the Feast, and successfully rocked Nashville this month.

Back in 2009, I wrote a piece for Christianity Today that suggested that all music was spiritual. Sure, some of it gets used for ignominious purposes, but the thing that makes music so powerful is the spiritual essence of it. It may be good or bad, true or false, but it’s all spiritual. Bono once said that the best music is either written about people running toward or away from God. T-Bone Burnett, who inspired me as a kid, once said that he could either write songs about the light or about what he sees as a result of the light. Glenn Kaiser rocked my world when he used blistering hard rock to simultaneously share the Gospel with the lost and to challenge the found to engage their pilgrimage with intensity and integrity. Reducing this wide spectrum of expressions down to a bucket labeled “Christian” is a way of dismissing it from the general culture on one hand, or uncritically endorsing it to a sub-culture on the other.

Reducing this wide spectrum of expressions down to a bucket labeled “Christian” is a way of dismissing it from the general culture.

There are several specifically “Christian” uses of music, and I am a fan of them all when done properly. Music can be used sacramentally, as in worship. It can be used prophetically, as a challenge to the church or the world to change its ways. It can be used educationally, to help train people to memorize Scriptures or stories that will enhance their understanding of their faith and its implications. Sometimes music is used well in these purposes. Often it is not. It seems to me the lame/great ratio is about the same in the Christian world as it is in the Top 40.

But when songwriters who happen to be Christians participate in the larger cultural discussion with songs that address love, lust, fear, war, politics or the beach, must it be called “Christian music” and be sold in separate stores and played on separate radio stations? The prevailing desire to label and categorize that kind of music seems to be the result of two things: Christians who would rather be spoon-fed “safe” music than engage in critical thought or discernment of their own; and snarky pop-culture critics who were exposed to too many Carman videos as children and want to make sure their cool friends know what some artists secretly believe

I get that there is too much useless music in the world and that some adventurous and open-minded Christians may wish to discover new artists who are particularly thoughtful when it comes to wrangling with the implications of a life lived under the gaze of God. I supposed they might turn to certain articles, like BuzzFeed’s, in that pursuit. But if the discussion is designed to create an alternative to personal discernment and critical thought, or to endorse bad art because it is about Jesus, we have a problem.

“JJT” has been chasing the thread dangling between eternal truths and temporal creative experiences for nearly three decades. He is a writer, a businessman, a father, an artist and a seeker. Read more about him at JohnJThompson.com. / Photo of Black Rebel Motorcycle Club performing in Nashville this May by John J. Thompson. Illustration by Jerod Clark. 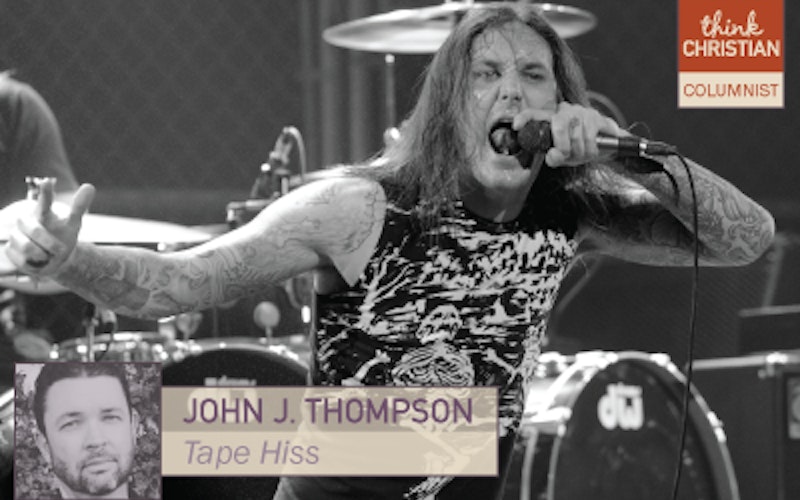 Tim Lambesis and the limits of labels