The legacy of former Mad magazine editor Al Feldstein, and how it formed one Christian's relationship with laughter.

After the recent death of Al Feldstein, the former editor of Mad magazine, many commentators traced the roots of cultural icons like Saturday Night Live, The Onion and The Simpsons to his satirical style and skeptical skewering. For me, it was an opportunity to consider why his sense of humor drove so many of my generation to be voracious readers of this mad monthly. Even more, how did it shape my own view of humor, then and now?

Reading Mad at first seemed like the natural progression from a pre-adolescent consumption of Archie comic books and Marvel superheroes to a more sophisticated and risky dose of cultural engagement. I’m certain that my parents knew I was reading it, and never challenged me or questioned why. This may have been parental wisdom or a form of laissez-faire distance. In either case it was a gift, forming a life-long interest in what makes us laugh.

In college I came across a thoughtful little book entitled For God’s Sake Laugh, by Nelvin Vos. His argument was that it’s very significant that humans laugh, and it ought to be Christians who laugh the most.

With a central definition of laughter as that which results from an incongruity placed in a ludicrous context - and analysis goes a long way in killing laughter - Vos suggested that there are three main figures when it comes to humor: the Wit, the Butt and the Clown.

Think of the classic slapstick pratfall of falling on a banana peel. The Wit perceives the ludicrous and describes it, amused by someone else falling on it. The Wit is the victor.

The Clown, Vos argues, is the type Christians should feel most comfortable with, for the clown accepts the ludicrous and overcomes it by laughing at himself or herself, and laughing along with everyone else. The clown is the Victim/Victor. The Christian doesn’t take himself too seriously, and humor can be an antidote to conceit and self-centeredness. Send in the clowns.

I don’t know if Vos read Mad, but he spent little time on the subject of satire beyond his description of the Wit as the distant observer. In the pages of Mad, satire took the form of the recurring comic strip Spy vs. Spy, which used Rube Goldberg-like machinations to poke fun at Cold War politics. The magazine tweaked the Hollywood studio system by referring to The Sound of Music as The Sound of Money. And the public face of Mad is still the gap-toothed, freckled, perpetually adolescent Alfred E. Neuman, whose famous slogan “What - me worry?” was offered in response to presidential elections, film stars, cigarette manufacturers and politicians.

I believe satire deserves a more prominent place in the Christian’s humor vocabulary. Satire can serve as a vehicle for self-criticism and self-awareness, yet it also always assumes a standard of right and wrong, justice and injustice. Satire says, “Life shouldn’t be this way.” Think of Voltaire’s satirical critique of the Roman Catholic Church or Jonathan Swift’s take on the reach of the British empire in Gulliver’s Travels.

Maybe laughter, even satire, is a sign of God’s grace, a sign to all that there is more to life than incongruity and brokenness and the ludicrous. Christians aren’t the only ones to laugh, of course, but when we do we become God’s mirth on earth. And when we employ satire to call ourselves and others to a higher standard, a better moral stance, a sharper perspective, we just may be doing God’s work as well. 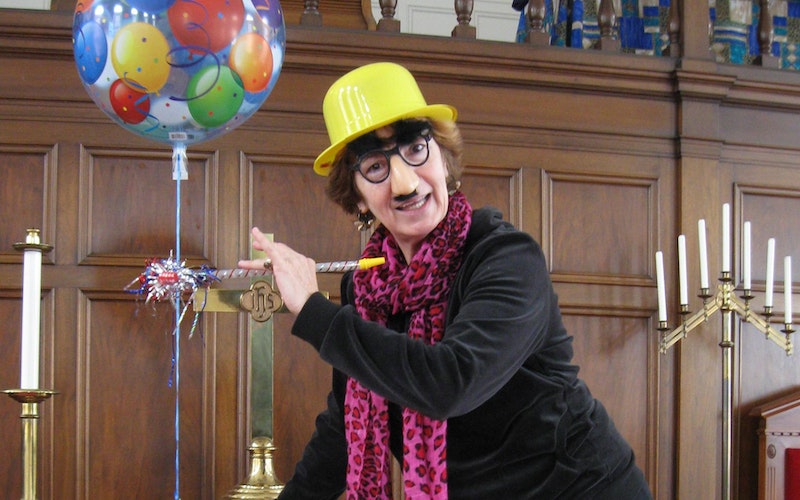 Laughing all the way from the tomb?