While Paisley deals in beer cans and bro parties, Stapleton offers a sip of something true.

“I woke up still not dead again, today.”

So jokes one of the last living treasures of classic Americana music, Willie Nelson, on his latest album, God’s Problem Child. His wry promise (“Still Not Dead”), framed in perfectly understated and traditional Texas country sounds, assures the listener that—despite Internet rumors to the contrary—the Red Headed Stranger is not dead yet. I just saw Nelson a few weeks ago, actually, as the brightest star in a tribute performance of the songs of his good friend, Merle Haggard. He sang a gospel song with Keith Richards, but that’s a whole other story.

Hearing this excellent collection of new recordings from Nelson, however, reminds me that it’s not only Willie whose days may be numbered. Country radio has never sounded less “country” than it does right now. Hearing Nelson, 84, deliver such a soulful, clear-eyed set of songs reminds me of the way my brothers and I would mark our height on a doorjamb in the garage. In this case, Willie’s line is right up there next to those for Haggard, Johnny Cash, and Waylon Jennings. Compared to this group, most current country artists are knee-high and shrinking.

Enter Brad Paisley and his latest release, Love and War. I’m a fan of Paisley’s first few albums and there is no denying his blazing speed on a Telecaster, but this sprawling, 15-song collection of predictable, super-clean, cliché-laden songs sounds like a Disneyland ride after listening to God’s Problem Child. It lacks the most critical ingredient in Americana music: resonance. Like great blues and gospel, the resonance of the best country music comes from shared struggles and transcendent hope. Love and War, for the most part, lacks both.

Paisley’s most spiritual number, the syrupy ballad “The Devil Is Alive and Well,” is a near miss. In it the artist laments “some of the worst things” that are done “in God’s name”—including television news, Internet hate, and other vaguely bad stuff—as proof that a conveniently externalized and personified “devil” is alive and well. The answer to all the evil is a kind of nondescript “love,” because “God is love.” It sounds nice, but rings hollow. It seems that he wants to kick at the hypocrisy of the contemporary “Christian right,” but he never quite does. He plays it safe, and that’s another missed opportunity. Paisley also continues to pepper his songs with celebrations of good-time substance abuse, soft-core sexism, light-hearted sexual sleaze, and UFC, so maybe he knows his soapbox is a somewhat rickety perch.

I remember when Paisley was celebrated as a champion of traditional country, back when his songs documented what sounded like real-life experiences, characters, and emotions. Unfortunately, Love and War, though not completely devoid of quality, is so full of predictable tropes and cheap gags that its real value is as a clinic for aspiring shredders or people looking for slogans for gas station T-shirts. It left me frustrated. If Brad Paisley can’t capture an authentic and satisfying country sound, what hope is there? Are we doomed to beer cans and bro parties when what we hunger for is a satisfying sip of something true?

Stapleton's songs never seek to escape the tension of life, just to survive it.

Then I spun the new set from Chris Stapleton and my despondency over the state of country music was immediately dispelled. Stapleton’s From A Room: Volume 1 offers nine songs that demonstrate just how powerful music can be. Stapleton’s voice is a thing of ragged, soulful beauty and his sensibility as a guitarist and arranger is stunning. By hewing faithfully to the roots of traditional country music in both lyric and accompaniment, Stapleton reveals the shared roots the genre has with gospel, blues, soul, and rock and roll.

Although Stapleton’s ambient, unadorned style is certainly astonishing unto itself, there is more to his resonance than his embrace of musical twang and an insanely cool voice. His songs, though often dark, ring like prayers uttered from a chamber of the heart we all share. Unlike Paisley, who mostly references Christian imagery as a metaphor for something temporal (his song “Heaven South” literally lists sweet tea, fried chicken, daisy dukes, main street, fireworks, beer, and ice), Stapleton contemplates fleshly things deeply. The opening cut, “Broken Halos,” acknowledges the redemptive potential of broken people of faith walking through the struggle of life. “Don’t go looking for the reasons,” he implores his fellow travellers, “don’t go asking Jesus why. We’re not meant to know the answers, they belong to the by and by.” His songs never seek to escape the tension of life, just to survive it.

When Paisley goofs about going on a “Grey Goose Chase,” he forgets that the best hard-drinking songs are the ones that come with a hangover. That’s the true part. When Stapleton talks about getting loaded, it’s either with a past-tense sense of remorse (“Up To No Good Livin’”) or a humorous present-tense sense of futility (“Them Stems”). When Paisley talks about the love of a woman, it always involves some kind of sentimentality or sexiness. In Stapleton’s hands, the longing for intimacy is like a longing for oxygen that has been cut off. When Paisley contemplates eternity, it is through the lens of a sentimental reunion of two quaint old lovers on the other side. When Stapleton talks about death on the closing song, “Death Row,” he captures a deeply resonant tone of spiritual desperation. When the protagonist is put down for his crimes, after talking to Jesus and sending a message to his mother and his girl, there is no happy ending.

The only song on From A Room: Volume 1 not penned by Stapleton is his cover of Willie Nelson’s 1982 hit, “Last Thing I Needed, First Thing This Morning.” Stapleton also features Willie’s long-time harmonica player, Mickey Raphael, throughout his album. Most importantly, though, he honors the tradition of Nelson and the original outlaws, as well as soul singers like Sam Cooke, Ray Charles, and Otis Redding, and bluesmen like B.B. King and Muddy Waters.

That Stapleton debuted with the biggest first week for a country album in over two years ought to send a message to the mainstream elements of the country music establishment about the value of good, true, and beautiful music. If they heed it, Willie Nelson should feel good about where the torch goes once he leaves us. 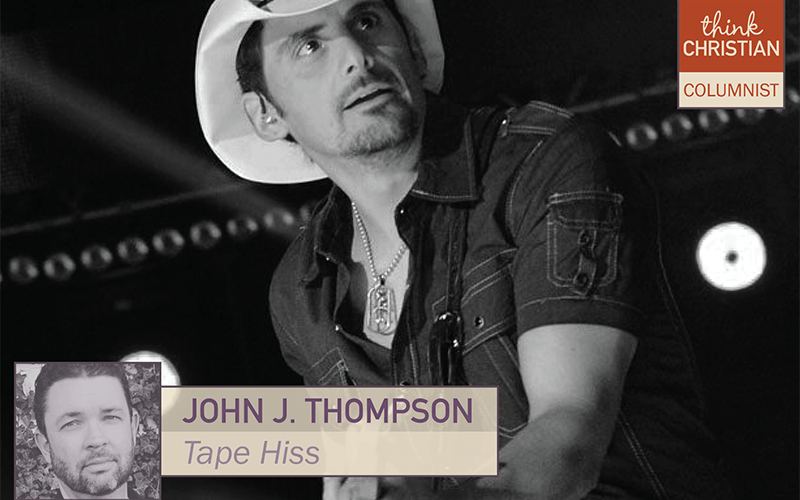 Brad Paisley, Paramore and finding faith at the top of the charts