It's not every day that a science-fiction show combines Silicon Valley, quantum mechanics, and temple theology. That’s what we get in Devs, the latest mind-bending tale from writer-director Alex Garland (Ex Machina, Annihilation). Yet for all its headiness, Devs is ultimately a meditation on how we respond to loss.

At the center of the story are Lily Chan (Sonoya Mizuno), a young employee at an enigmatic Silicon Valley tech company named Amaya, and Forest (Nick Offerman), Amaya's stoic founder. We bear witness to Lily's loss in the first episode when her boyfriend, Sergei, is murdered by Forest’s henchman for trying to steal corporate secrets (unbeknownst to Lily, Sergei was a Russian spy). It's only later that we learn the full scope of Forest's own loss: some time earlier, while talking to him on the phone, his wife and daughter were killed in a car accident.

The show’s title refers to the top-secret research lab located on Amaya’s campus. The central question of the series is what sort of work is being done at Devs. It's clear from the first episode that Forest has constructed Devs as a latter-day temple. The Amaya complex is in the woods outside San Francisco. Devs itself is even more remote, at the end of a forest path lit by literal halos of light. The exterior of the building is drab and rectangular—unremarkable, even, except that (as one astute viewer noted on Reddit) its dimensions echo the tabernacle as described in Exodus 37. The interior is a sci-fi Eden, with every surface covered in gold. In the center, floating magnetically in the air, is Devs’ core: a cube suspended within a cube, accessible only by a floating elevator that acts as a sort of airlock. Those employees Forest has elevated to the Devs team serve as priests, granted exclusive access to the system.

In the Old Testament, the tabernacle (and later the temple) had similarly successive layers of increasing holiness. Outside was the profane world. Inside, the courtyard was accessible to any Hebrew, but the tabernacle itself was only accessible by priests. At the center of the tabernacle was a cube called the “Holy of Holies.” This housed the Ark of the Covenant, upon which rested the physical manifestation of God's presence on Earth. Only Israel's high priest could enter the Holy of Holies—and even then, only once per year.

The Hebrew temple functioned, then, as a sort of airlock—a way for God to safely dwell among God's people. God's physical presence was dangerous for humans. (Think of poor Uzzah, who touched the Ark of the Covenant to keep it from falling and was struck dead.) The tabernacle's design, including gold-covered walls and furniture, echoed the paradise of Eden, when God and humanity lived in harmony.

If all of the parallels to tabernacle and temple imagery weren't enough, Garland packs Devs with more religious imagery, including a shot of Forest framed by those conspicuous halos of light and a grainy image of Jesus' crucifixion. It all begs the question: What god is at the heart of Devs? And how does this god relate to Forest’s grief? (Spoilers ahead.)

Devs is ultimately a meditation on how we respond to loss.

In the denouement, Forest reveals that the name Devs is an inside joke. It’s actually Latin, meaning that the “v” is a Roman “u.” The project is not “Devs” but “Deus,” or “God.” Holding a closed, deterministic view of the universe, Forest believes there is no free will. To him, all existence is predicated on cause and effect. Thus, with enough processing power (say, the amount that resides in Devs’ holy of holies), one can, from a single particle, unspool the whole of existence. One can attain omniscience. The particle’s current state is a result of a previous cause, which is also the effect of a previous cause, and so on and so on, back to the beginning of time. Once one has extrapolated back to that prime cause, they can calculate every effect forward again, thus creating a complete picture of reality at any given moment, from Jesus’ crucifixion to Forest’s daughter playing in her room to the real-time conversation the priests of Devs are having as they try to understand this quantum miracle.

Forest's stated goal is to harness the power of Devs to resurrect his daughter. His true motivation, though, is to absolve himself of the blame he feels over her death. (The giant statue of her that looms over Amaya’s campus feels less like a tribute and more like a curse.) Forest plays out endless scenarios in his head: if he had hugged his daughter a little longer that day, made breakfast more quickly, or any one of a thousand other small changes, his family would still be alive. Forest finds comfort only in his conviction that the universe is deterministic. What happened is what had to happen, and he could not have chosen differently.

But Devs doesn't fully work until one coder-priest, Lyndon (Cailee Spaeny), changes the operating assumptions from a deterministic universe to a free-will multiverse. Rather than a closed, cause-and-effect single universe, under this algorithm every choice made creates two new universes, one where each choice leads to different outcomes. When Devs runs under Lyndon's algorithm, it works flawlessly. Rather than rejoicing, however, Forest flies into a rage and fires Lyndon.

Forest needs to believe that there is one universe, not many. If there are many, it means that he has been cursed to live in the universe where his family died, while countless other Forests get to live out their lives with his family. His grief has trapped Forest into a deterministic reality. It has also excused evil. Forest takes no blame for having Sergei murdered and for traumatizing Lily. How could he if he had no choice? In this, Forest's attitude mirrors Paul's lament in Romans 7: "I have the desire to do what is good, but I cannot carry it out. For I do not do the good I want to do, but the evil I do not want to do—this I keep on doing."

In this same chapter, Paul observes that the very law that gave us the tabernacle also trapped us under the deterministic power of sin. Similarly, Hebrews 10 says: "It is impossible for the blood of bulls and goats to take away sin." So too has the temple of Devs trapped Forest in his own self-denial, allowing him to justify any action. He imagines himself to be a tech messiah, revealing the truth of reality. But Forest is trapped in a deception. The temple he’s constructed for himself is in truth a prison.

This is revealed in the character of Lily, whose name hints that she embodies the promise of Easter. Lily’s final actions, which I won’t spoil in detail, break Devs’ predictive ability and create a world of new potential. Similarly, in John’s gospel, Jesus comes to humanity as the tabernacle made flesh. He meets us face to face and tears the airlock in the temple open. And through his death and resurrection, Jesus frees us from the very thing that Forest punished himself with in his grief: the determinism of sin. 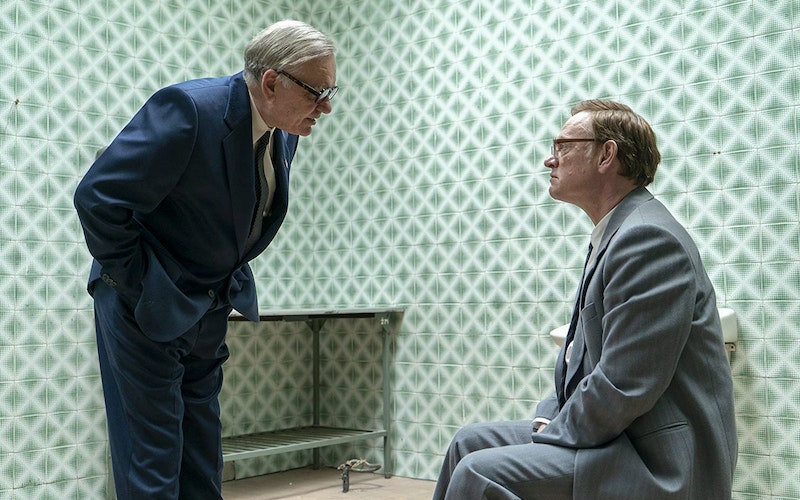