In lieu of the usual movies, here are a handful of TV episodes that capture Christmas longing.

About 10 years ago, our family began to practice a more intentional Advent. This meant shifting some of our favorite “holiday” movies—the ones featuring Clark W. Griswold, Buddy the Elf, and Bing Crosby and Danny Kaye—to the days after Christmas. (This is easier now that our kids don’t return home until then and would be crushed if we watched these without them.) In place of the movies that used to fill the first few weeks of December, we’ve found a handful of television episodes that capture the sense of waiting, longing, and hope that is particular to this season. May they brighten your Advent too.

Christmas is the busiest time of the year for clergy, and it’s no different for Adam (Tom Hollander) at St. Saviour’s in East London. The vicar and his wife are good-hearted and honest, if not always holy. The humor is often irreverent, the cast of characters are completely broken, the worst of church life is often on display, and yet my pastor husband and I find this to be one of the TV shows that most makes us want to serve the Church and the world for the rest of our lives. This Christmas episode, in particular, pretty much makes us weep. I think I view it from the eyes of a girl who's had a front-row seat to the life of a pastor each December, and respond instinctively each time I watch Rev. Adam’s Christmas Eve meltdown. Watch also for the brief moment when Colin, the parish drunk, enters the sanctuary before the Christmas lunch and—despite a hangover—completely preaches the gospel. Yes, Merry Christmas, world.

Studio 60 on the Sunset Strip — “The Christmas Show” (season 1, episode 11; available on Amazon)

We are unapologetic lovers of Aaron Sorkin in our house and sure do wish his series had lasted more than one season. In any case, we're glad it lasted long enough to feature this Christmas episode. The otherwise typical plotline—in which Matt (Matthew Perry), a producer for a Saturday Night Live-type comedy show, tries to keep things on track—is brought to a reverent standstill by a concluding musical sequence. A New Orleans' brass ensemble displaced by Hurricane Katrina (and led by the real-life Trombone Shorty) perform “O Holy Night,” creating an absolutely magnificent meta moment for us at home—viewers watching a fake audience watch a fake television show. I might even use the word transcendent.

Call the Midwife's Christmas special invites us to meditate on each member of the Holy Family from a different perspective.

Originally airing in December 1972, this is the first of M*A*S*H's “Dear Dad” epistolary episodes, in which one of the characters writes a letter home. While M*A*S*H is considered a TV classic, much of the humor would now be considered racist or misogynistic. This episode, though, with the striking image of Hawkeye (Alan Alda) dressed as Santa and lifting off in a chopper to rescue a critically injured soldier, is an Advent-like prayer for peace on earth, goodwill to men.

If you watch nothing else during Advent, watch this episode. It is gorgeous from start to finish. The episode begins with an older nurse, Jenny (Vanessa Redgrave), reminiscing about learning the true meaning of Advent during her first year as a midwife living among the Anglican nuns in London's East End. “But at Nonnatus House, a different magic was at work,” she says. “The sisters spent Advent in prayer and meditation, and the atmosphere was not one of excitement but of expectant joyous calm. I wasn’t entirely sure what I should make of it. I was young, and faith was still a mystery to me.”

Amidst the various plotlines involving an abandoned baby left on the nuns' doorstep and the chaotic planning of a nativity pageant, we see a younger Jenny (Jessica Raine) helping to clean and prepare the figures for the church’s outdoor creche. The camera lingers on each painted, plaster figure as it’s lovingly held under the kitchen tap water, inviting us to meditate on each member of the Holy Family from a different perspective. In a parallel scene, we watch Jenny and Sister Evangelina (Pam Ferris) bathe and dress the wounds of an elderly vagrant woman named Mrs. Jenkins (Sheila Reid). Accompanied by “O Come, O Come Emmanuel,” the scene becomes a visual metaphor for all of humanity’s need for rescue. The Advent hymn is perfectly placed, but Mrs. Jenkins’ "work house howl" in a later scene is, perhaps, the truest soundtrack to Advent.  Even so, come quickly Lord Jesus.

Tamara Hill Murphy lives with her husband Brian, an Anglican priest, in Bridgeport, Conn. Her writing has appeared in Plough, Art House America, and Englewood Review of Books. Find her at tamarahillmurphy.com or follow her on Facebook at Tamara Hill Murphy-A Sacramental Life. 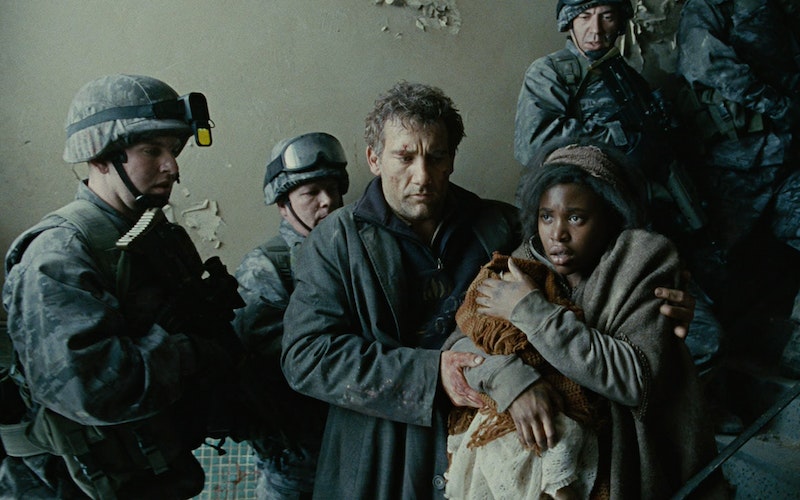