Halloween is approaching, and for me that means curling up on the couch to watch scary movies. Below are five horror films that I think have something interesting or provocative to say to Christians.

If the horror genre seeks to evoke our deepest, most primal fears, then Alien is perhaps the most effective religious horror movie ever made. But it isn’t horrifying just because a few unprepared space truckers encounter a hostile extra-terrestrial; after all, the science-fiction genre has long prepared us for the grim possibility that alien life-forms will find us delicious.

But what if we pulled our way into the cosmos only to find that the universe itself hates us? Or is, at best, utterly indifferent to us? There is no God in Alien, loving or otherwise. The cosmos is one big Darwinian proving ground. The moral and spiritual traits that give our lives meaning are weaknesses that will ensure our (grisly) demise at the hands of cosmic competitors "unclouded by conscience, remorse or delusions of morality." A terrifying picture of a world without God, without Christ, without grace.

Filmmaker David Cronenberg is famous for his fascination with "body horror" - films and ideas that explore (and exploit) our discomfort with our own bodies. Christianity's uneasy relationship with flesh (itself an unpleasant word that evokes sin and shame) is no secret. Believers have long struggled to understand the adversarial relationship between body and spirit without falling into the gnostic heresy that our bodies are unredeemable.

ExistenZ provokes and challenges this squeamishness in a way that even gory slasher films do not. Its protagonists must navigate a virtual labyrinth while tethered to grotesque biological artifacts, which interface with the human body in disturbing ways. We instinctively recoil from the flesh, bone and gristle. Why?

Does evil spring from our own minds or from an outside source?

Invasion of the Body Snatchers (1956)

The idea of “pod people" may sound cheesy to us today, but Body Snatchers will immerse you in the fear and paranoia of a Western Christian culture standing (it believed) at the brink of apocalypse.

We may not fear communism with this intensity anymore. (Or is it McCarthyism that Body Snatchers is critiquing?) But the plot – in which the people of a small American town are replaced, one by one, by soulless identical copies - is a metaphorical template you can apply to all sorts of situations. What is the price of perfect conformity in political views, business practices, patriotic fervor, theological beliefs? Where does prudence and caution become caustic paranoia?

Eleanor (Julie Harris), a quiet protagonist loaded down with emotional baggage, visits a creepy old mansion accompanied by a team of paranormal investigators. The haunting (if that's what it is) begins with seemingly benign supernatural shenanigans, but gets more frightening as time goes by.

The Haunting plays with our perception of evil and our discomfort with mental illness - topics that Christians usually discuss only in vague and uncertain terms. Is Eleanor being victimized by supernatural evil, or is she simply having a mental breakdown? Does evil spring from our own minds or from an outside source?

The Exorcist is the model for "religious horror," depicting spiritual warfare in traditional form: servants of God against the devil. Disturbing as it is, The Exorcist is a theologically affirming (if not exactly uplifting) film: evil wreaks havoc for a time, but is ultimately rebuked by God through His flawed, human servants.

What is most compelling here is not The Exorcist’s portrayal of doubt, faith and self-sacrifice, but rather its picture of evil. The Exorcist’s personified evil isn't out corrupting the rulers of the world, inciting war or oppressing humanity. It is instead content to ruin a young child - it’s vicious but also supremely petty. The film’s devil and its priestly antagonists understand that the frontlines of spiritual conflict are located not on grand battlefields or in parliament buildings but in the hearts of “the least of these.”

Andy Rau is a content manager at BibleGateway.com. He lives in west Michigan with his wife and two children. / Photo from The Haunting courtesy of MGM. 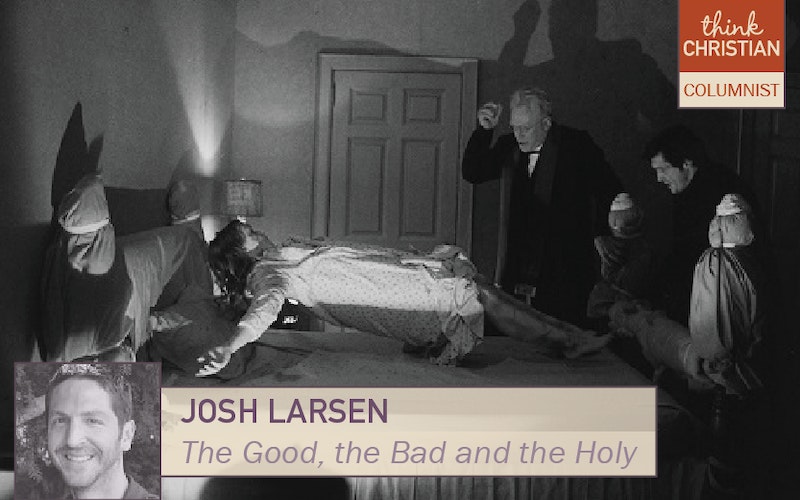