Kurt Russell's character in Guardians of the Galaxy Vol. 2 is a powerful creator, but his God-like qualities end there.

I would include Yandu in this image. Mantis represents some aspects, but not all of them. Though Yandu is a broken character, incapable of fully representing God, in the end he gives his life for Peter and even as he floats away after being frozen by open space, his arms are extended in a cross-like formation. "Greater love has no one than this: to lay down one’s life for one’s friends." I loved that Vol.2 did a sort of flip where the "real dad" was a false Father, and the one who adopted Peter, just as we are adopted in Christ, is the one who showed true love and sacrifice for his "son." ♥

First of all, your approach to the MCU is undoubtedly NOT as a fan-boy. It's occasionally painful to approach your articles and movie reviews because you so clearly don't "get it". I understand. The MCU should do better at explaining itself so as to aid those without a more intimate knowledge of these characters and premises and back-stories to bring about a better measure of enjoyment for you. I do, however, take umbrage with what comes off to me as a snobbery towards the fan-boy enjoyment a good portion of the audience in these movies do have. I'm not necessarily defending GotG Vol2. I found it to not meet my expectations. Story--serviceable if somewhat simple. Action--good and easy to follow even if it was "bombastic" and bordering on too violent for PG-13. Themes and messages of the film did land for me, even if the sentimentality was muted on account of the harsh and callous nature of the action and humor respectively. But on to my point. Ego IS the planet. His face appearing in the planet was EXACTLY what many of us were hoping James Gunn would deliver. Ego, however, is NOT Peter Quill's father in the comics. Thus, James Gunn took license with this connection and in that, perhaps, allowed us to receive the message that you can be someone's father, but are you going to be their daddy too? I found it compelling. I found it fun.

Now I know this isn't a "movie review". But I find some of the licensing you're taking to deliver a point on the nature of our Father God and Savior God (big "G") to be indicative of missing the point of the movie. Perhaps, I'm as guilty of misreading this article as I feel you were misreading the movie. But alas, it allows me this chance to chime in when I couldn't while listening to your FilmSpotting review.

Still an avid fan-boy of your work. Keep it up!

I'm always intrigued when the "you didn't get it because you're not a fanboy" argument comes up. I understand the divide - you have more knowledge of the source material than I do - but I don't see how that applies to your point here. I actually appreciate the visual touch of Ego's face appearing on (as) the planet, so I'm not sure how my knowledge of the comics applies here.

In general, the theological implication of the Ego character is one of the things I like about the film. This piece is more of an appreciation than a critique. So I'm not clear what we differ on, or how my familiarity with/fondness for the source material plays into it.

Your article above and my comments below do represent incongruous arguments, I admit. I do not take issue with your premise, vehicle or conclusions in the above article. I re-read it. It's a good piece and I, as I alluded to in summation above, misread the article first time through. I was wrong to build my comments around the "fan-boy" argument. I read your take on Ego's face representing the "turn" for the audience in recognizing mal-intent on his part incorrectly. Ego in the comics, as I stated above, IS the planet. His personification as Peter's father was "dramatic license" and I took the image of the "living planet" as nothing more than being true to the comics. In fact, my issue before is just that. So many people love these films. Most of them work for me, a few have not. But critics seem to decry these films on points that make little sense to the audience I imagine are going in to see them. To my two sons and daughter, they are hero save the world stories. Expectations drive results. So, perhaps, I should take it easy when a critic doesn't like it. Keeps me honest. My measure is more, will this film hold up to repeat viewings? Will I enjoy the Blu-Ray? Most of the time yes. Except for Green Lantern, Suicide Squad and Deadpool, I've purchased them all. Watched most of them again. Enjoyed it better second time (as I think you admitted to for the first GotG). I get a little defensive when a critics microscope is used to examine these films. Sometimes simply checking the temperature, blood pressure and pulse is enough to determine if a patient is doing well.

Hope that explains my misguided effort to "chime in" above.
DASJr

Not misguided at all, David. Thanks for the clarification. Basically you see Ego's face appearing on (as) the planet as benign, based on your knowledge of the comic, while I saw it as ominous. Fair enough. FWIW, the movie did make clear that Ego and the planet were one and the same. I got that, so this is mostly a matter of interpretation. 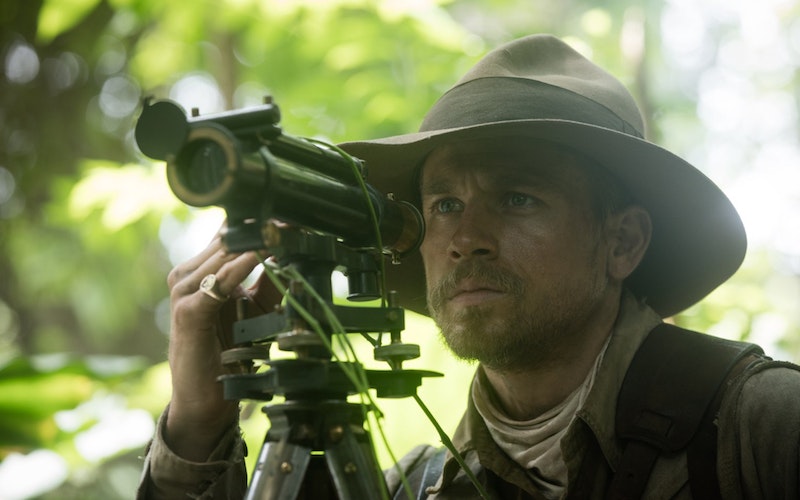 Why The Lost City of Z Will Never Be Found