Five years after its debut, the musical sensation comes to Disney Plus and asks how we will respond to this fraught, historical moment.

Though it has only been five years, the world feels considerably different now than it did in 2015, when the musical Hamilton debuted. In 2020 alone we’ve experienced a pandemic, political fighting, and far too many injustices to name—all before the halfway point. And yet Hamilton speaks to all of these things, which makes it welcome news that a filmed performance of the musical will be released July 3 on Disney Plus, earlier than expected.

In preparation for the release I have been relistening to the soundtrack, featuring the music and lyrics of the show’s creator and star, Lin-Manuel Miranda. The blend of hip-hop elements with the catchy musical melodies I grew up around is a perfect match for my tastes. When the soundtrack first came out, it constantly played on every drive or run for months without replacement. The melodies still get caught in my head from time to time; the catchiness and creativity of the lyrics feel reminiscent of some of my favorite hip-hop lyricists.

Suffice to say when I revisited the album I knew what I was getting into. I knew the lyrics, the story, and the style. But, much like how the world has changed, so have I. I was surprised that this time what I heard and experienced was different. Time and struggle have changed my perspective. I feel now I am at a place where I understand Hamilton in a new light.

I look to the song “Dear Theodosia” as an example. Nine months ago my wife and I welcomed our beautiful baby daughter into the world. What five years ago was just another pretty song has become a challenge to me as a new father. “You'll come of age with our young nation / We'll bleed and fight for you, we'll make it right for you / If we lay a strong foundation we'll pass it on to you.” What foundation am I leaving for my daughter? I have an opportunity today, tomorrow, and this year to do what I can to stand and fight against injustice, an opportunity to stand firm in the word and speak out against what hurts the heart of God.

Much like my life as a new parent, my life as a Christian brings new meaning to Hamilton while listening to it in 2020. Another song, “History Has its Eyes On You,” presents a particular challenge. Sung by George Washington (Christopher Jackson), the song makes me realize that Christianity has a huge part to play in this particular historical moment. “Who lives, who dies, who tells your story?” Washington sings. I must ask myself: what story will others tell about Christianity in 2020, 2021, or 2025? Is this a year of revival among us, a year where we are known for standing up for the weak, the needy, the hurting, and the broken? Or is this a year we will be remembered as being silent? Or even worse, oppressive.

Washington suggests that “you have no control” over your story, but we as Christians can do our best to leave behind a legacy that honors the God we claim to follow. We may not be able to control the narrative spun by others, but we can control how we respond to the situations that surround us. We are called to love sincerely and cling to what’s good. We are meant to stand and speak up for those who cannot speak for themselves. It is not enough to sit on the sidelines, because God challenges us to love with more than just our words, but also with our actions in truth.

With protests erupting across the globe in response to the police killings of Breonna Taylor, George Floyd, and other unarmed African-Americans, I do not wish for the Christian legacy to show we cared more about our politics and our own communities than our fellow hurting brothers and sisters. I do not want my daughter to grow up in a world where her father was quiet while people he claimed to love stood up without him. No, it is our turn as Christ followers to be Jesus’ hands and feet. History has its eyes on us. How will we choose to respond?

“History Has Its Eyes on You” is a call to action for Christians to be the body of Christ by loving our neighbor. As Miranda’s Alexander Hamilton sings in “Aaron Burr, Sir,” “If you stand for nothing, Burr, what'll you fall for?” It can be easy to say things like "I stand for the Bible and Christian morality.” However, what does that mean in a world where many of our brothers and sisters experience daily injustice and systemic racism? What good is my faith without the works to back them?

When I look back at this time in history, I hope my decisions make me and my daughter proud that I worked hard to do my part to make this world a better place. Not just for myself, but for all those who feel like society is failing them. Most importantly, I hope my actions reflect well on the Gospel I claim to believe and follow. I want to walk in the grace and love of Christ, guided by the Holy Spirit, and represent our just God in a way that honors the love we have been given. I believe Jesus asks nothing less. 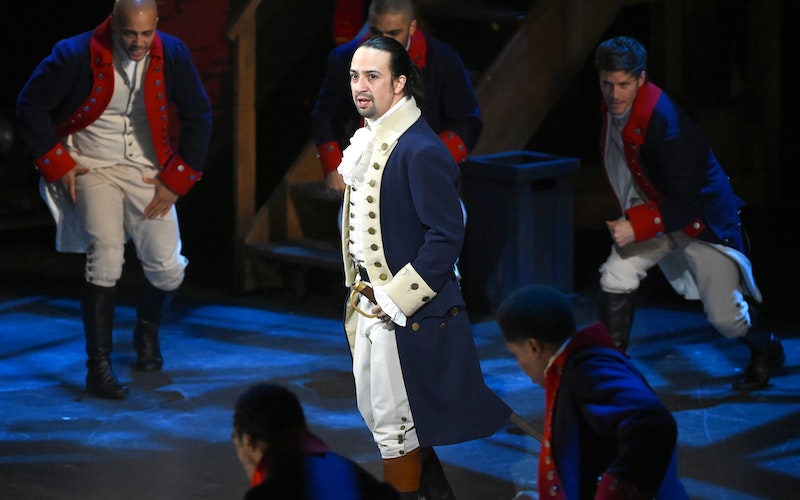 Hamilton and the Diversity of God's Kingdom