War for the Planet of the Apes looks not to the future, but backwards, all the way to Genesis.

War for the Planet of the Apes finds the chimpanzee Caesar (Andy Serkis, giving another masterful motion-capture performance) once again trying to broker peace between his colony of advanced apes and the remaining humans who have not fallen victim to the very virus that caused the apes to “evolve.” Early on, Caesar makes a gesture of detente, releasing a handful of human prisoners, but this act of good faith is answered with a brutal nighttime attack by The Colonel (Woody Harrelson), the madman leader of a rogue, human militia. Enraged, Caesar tracks The Colonel back to his wintry fort in the north. There he finds an ape concentration camp, where the suffering and cruelty makes him wonder if it might not be better to wipe humanity off the map for good.

The trajectory of the Apes films, toward a world without humans, functions as a sort of return to Eden, in the days before God made “mankind in our image, in our likeness.” In War for the Planet of the Apes, humanity has fallen from that lofty status. The virus has mutated in such a way that some of the people the apes encounter have lost the capacity for speech, which The Colonel regards as a form of devolution. Notice also how greenery—weeds, vines, and the like—has overtaken most human-made structures. (It’s only in the freezing north that military steel still stands strong.) And without giving anything away, I can say that the final scene takes place in a locale that is pristine, prehistoric—downright Edenic. This is a science-fiction movie that looks not to the future, but backwards, all the way to Genesis.

In addition to chronicling humankind’s downfall and potential extinction, War for the Planet of the Apes also posits Caesar as an alternative Adam. It is this chimpanzee—not some noble vestige of existing humanity—who now reflects the imago dei. And we see this not in Caesar’s intelligence or ability, but in something far simpler, yet more divine: his capacity for mercy, or what Slate Culture Gabfest’s Stephen Metcalf called an “extra-human wisdom.”

War for the Planet of the Apes looks backwards, all the way to Genesis.

Since Rise of the Planet of the Apes, when as a young chimp he was taken from the loving home of the scientist who adopted him and placed in an abusive facility, Caesar has had a complicated relationship with humans. Despite all the trauma he endured at their hands, he held out hope in their potential goodness, an attitude challenged by a more vengeful ape, Koba, in Dawn. Koba reappears in War by way of haunting visions, in which he goads Caesar toward retaliatory violence. In a sense, the real drama of War for the Planet of the Apes is not whether or not humanity survives, but what role Caesar plays in their inevitable decimation.

If Caesar offers a portrait of the dawning of the imago dei, Woody Harrelson’s The Colonel is a depiction of the image of God sadly slipping away. The Colonel has power, but he knows no mercy, even for his own men. Those soldiers who lose the ability to speak due to the virus—who, in The Colonel’s estimation, become less human—are shot. The apes fare even worse. In one of the movie’s most disturbing recurring motifs, ape prisoners are tied to giant Xs made of wood and left to die. When he is captured, Caesar finds himself strapped to just such a cross.

How Caesar responds, once he escapes, reveals whether or not he is fully ready to bear the image of God. After all, the imago dei ultimately lies in our ability to “act justly and to love mercy and to walk humbly with your God.” Indeed, to pick up our cross and follow the one who hung on a cross in our place.

War for the Planet of the Apes climaxes with a large-scale battle, yet in a wry narrative touch, it is neither apes nor humans but an unexpected act of nature that decides the final outcome. It’s an awesome moment for sure, but an even more important one may come a bit earlier, in a decision Caesar makes during an intimate encounter that takes place away from the field of battle. In this instance, War of the Planet of the Apes suggests that we bear the image of God not when we display a god-like expression of power, but when we pass along some small semblance of the mercy that has been shown to us. 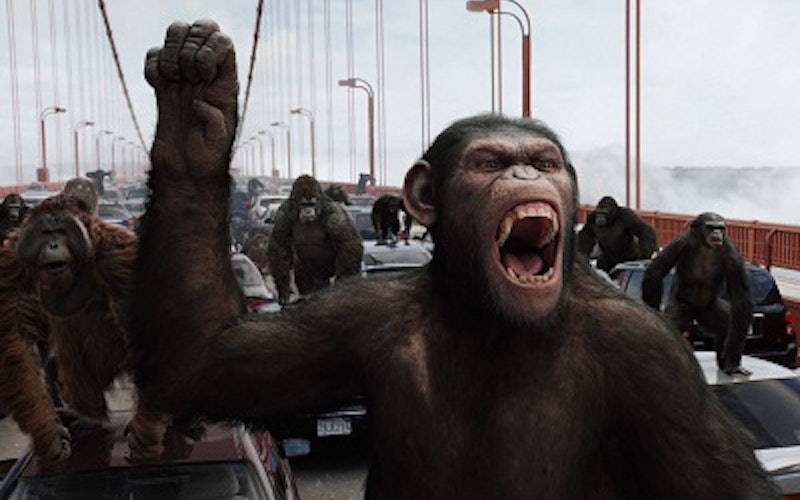 Planet of the Apes and the Reason Monkey Movies Fascinate