By seeking both justice and healing, the HBO series nods to the ways of our righteous God.

Activists are often compelled in our work because of the pain and trauma we’ve experienced in our own lives. Our pain makes us empathetic and propels us into becoming justice-seekers, but it also has a dark side. Unhealed, it can become our downfall, eventually allowing fear or hate to consume us.

That is in many ways the reality that HBO’s Watchmen explores. This remix of the 1986-87 DC Comics series focuses on a multigenerational band of superheroes whose lives have almost all been touched by racial violence. The first episode opens with the 1921 Tulsa race riots (i.e., the massacre of "Black Wall Street"), then fast-forwards to the present, with the “good guys” trying to make sense of a world that hasn’t much improved. They strive for justice, but struggle to do so as their emotional wounds seep through their facades and complicate their work.

Undoubtedly, this is a show intent on demystifying the mythical attachment we have to heroic men and women wearing masks. They’re just people, glorified activists in a sense, who are flawed like us and in need of a healthier path forward. Take, for example, the very first superhero, Hooded Justice (Louis Gossett Jr.). He’s a black cop named Will Reeves, who survived the Tulsa race riots as a child and is now compelled to fight against the racism he continues to experience as an adult. His identity isn’t known in the original comic, but showrunner Damon Lindelof’s choice to make an explicit connection between this character’s rope accessories and his racial identity is profound, linking Hooded Justice’s embodied pain with the history of lynching in the United States. He’s a hurting man; the ways he violently punishes his perpetrators may solve crime, but they never make him feel better.

That, in many ways, is the problem. Masks are the de facto symbol of repressing pain in Watchmen. These facades only make the characters cruel and prevent real healing. This is perhaps the greatest irony of social justice, both in the show and in real life: as activists, we spend our days focused on finding ways to improve the well-being of the communities we love, but in the process we often forget to take care of ourselves. Sometimes, we even become the monster.

In similar fashion, Reeves’ granddaughter, Angela (Regina King), continues the legacy of Hooded Justice as a vigilante superhero, contending with a new brand of racism in the present. She takes on the identity of Sister Night, donning a hooded nun’s habit and wielding a weaponized rosary. But, like her grandfather, her mask often does more harm than good. When her co-worker Laurie (Jean Smart) tells her, “Masks are used to hide our pain and trauma,” Angela responds, "I wear it to protect myself.” Laurie quips back, "Yeah, from the pain." Laurie’s words resonate, revealing the way our claims to self-preservation are really just code for self-neglect.

Watchmen demystifies the mythical attachment we have to heroic men and women wearing masks.

All of us—perhaps particularly those of us who identify as Christian activists—need to come to terms with our own past and find paths toward healing if we are to pursue justice in healthy ways. We must be like the one who cries out in Jeremiah 17:4, “Heal me, Lord, and I will be healed.” Only God can bring true healing to our bodies and souls for the crimes committed against our loved ones. Only God can help us confront the injustices we’ve personally experienced, so we can embrace a peace that surpasses all understanding. Yes, justice is still needed. But justice alone will not bring healing. That is a separate process. As Will Reeves tells his granddaughter in the final scenes of the first season of Watchmen, “Masks hide our wounds, but wounds need air to heal.” What I find so refreshing about Watchmen is that the show explores a path in which Angela is able to pursue both justice and healing.

In the last two episodes, Angela finally confronts the white supremacist group the Seventh Kavalry as herself, with no mask. This is the result of various transformations on Angela’s part (dare I even say, conversions) involving Nostalgia pills, reliving her own grandfather’s past, and then undergoing a treatment called “neumodialoysis” to flush out the memories. Throughout this process, Angela confronts her collective past. The memories she lives through reveal the linear trajectory of systemic racism, as well as the ways the past informs the present—physically as well as emotionally. (The treatment Angela receives nods to epigenetics and the ways racial trauma can be passed on to subsequent generations.) Significantly, the goal for Angela is neither to forgive nor forget, but rather to not obsess about the past. Angela finds the space she needs to process her emotions, reconnect with her grandfather, and then transfer these memories into a tertiary storage (which, oddly enough, is an actual elephant).

This is, obviously, where a one-to-one correlation between biblical healing and the process of healing in Watchmen breaks down. Nevertheless, the healing that God provides works in similar ways. He beckons us to come to him with our troubles, so that in giving up our pain to him (much like an elephant, who never forgets), our just God remembers our suffering, while offering us healing in return. This, truly, is the ideal. Because moving on from the past shouldn’t mean that we forget, nor does it mean that we stop seeking justice. Rather, the healing that God provides simply allows us to take off our masks and have a healthier relationship with the past. And that is a process that is separate from, and even precedes, the work of justice. 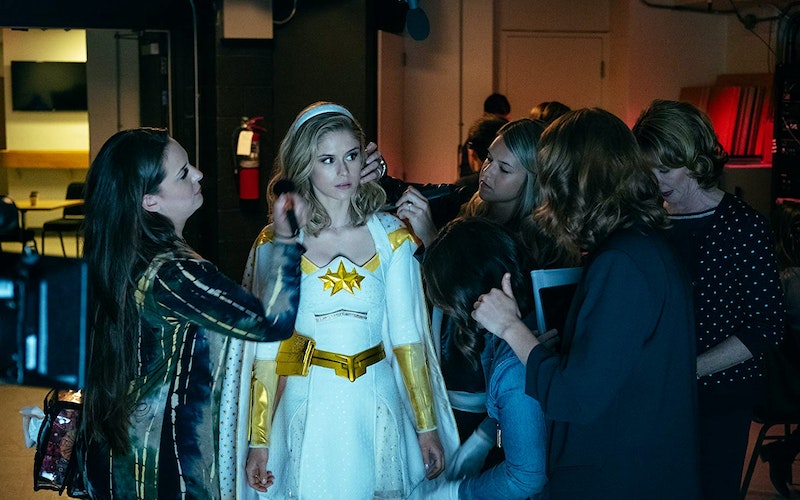