Keef Knight (Lamorne Morris) is the mild-mannered artist behind a mild-mannered, popular comic strip about “boring breakfast food” called Toast-N-Butter. One afternoon, while posting flyers around San Francisco for an upcoming comic convention—as Bill Withers’ “Lovely Day” plays in his headphones—Keef is swarmed by police.

Eventually, Keef is told that he matches the description of a mugging suspect—but that’s after he’s been held at gunpoint, tackled to the ground for “resisting,” and handcuffed with a cop’s knee in his back. Meanwhile, his roommate Gunther (Blake Anderson) swoops in swearing and shoving police, demanding Keef’s release. Unlike Keef, Gunther is met with conversation and holstered weapons. Gunther is White, while Keef is Black. Afterwards, though visibly shaken, Keef brushes himself off and claims to be “good.” That’s when the visions begin.

The Hulu original series Woke—inspired by the life of cartoonist Keith Knight—takes a comedic look at what happens when we finally see the light. In Keef’s case, he’s immediately besieged by talking inanimate objects, from trash cans to scooters. Chief among them is a black Sharpie marker (voiced by J.B. Smoove) who hypes Keef up to start a revolution, constantly reminding him of who he was before the success of Toast-N-Butter. Keef can’t escape these voices because his run-in with the police has unlocked a new view of this world and his place within it. Keef is now “woke.” “The fog has been lifted,” the Sharpie testifies. “I can see! The lines have been drawn. It’s time to make your mark.” Keef learns, however, that there’s a price for knowing the truth—and an even bigger price for speaking it.

The concept of being “woke” is nothing new in the biblical sense. The Apostle Paul, for example, also meets an unexpected force that sends him helpless to the ground. While Keef isn’t left blinded by the police—as Paul is by the presence of Jesus—both have their vision renewed following their encounters. What’s key is who they both were before their conversions.

Woke takes a comedic look at what happens when we finally see the light.

As a religious official, Paul was a strict conformist to the establishment. On the orders of religious authorities, he actively oppressed Jesus’ early followers, throwing them in prison and testifying against them at trial, sending them to their deaths.

While Keef doesn’t work to impede the lives of oppressed people, he fails to use his position in the spotlight to help those people. “I’m not controversial,” he insists when approached by an editor, Anya (Sasheer Zamata), to draw for a local, progressive weekly “confronting [problems] of race and class.” Keef is too close to syndication and a big payday to focus on such issues. “Why is it,” he wonders, “that as people of color, we’re always having to stand for something?” He rejects Anya’s point that, as the rare, successful Black cartoonist, he’s “controversial by existing.” Still, he chooses not to emphasize his racial identity in his work. (As one surprised fan says after meeting Keef, “It’s funny, I didn’t think you’d be . . . tall.”) It’s that very ambiguity that accounts for Keef’s crossover appeal, according to his publishers.

But to be complacent is to be complicit; by casually accepting his own erasure, Keef gives credence to the erasure of others—particularly those who face marginalization but lack the platform to effectively speak out against it. Keef’s strategy to “keep it light” proves futile with his face pressed against the sidewalk. For Keef, like Paul—like many of us—it takes getting knocked down to finally discover a reason to stand up.

For both Paul and Keef, it’s not enough to simply know the truth. In recounting his conversion, Paul says that he was chosen “as a servant and as a witness to Jesus.” He has been charged with spreading the gospel. “‘I will rescue you from your own people,’” Paul says, quoting Jesus. “‘I am sending you to them to open their eyes and turn them from darkness to light.” From then on, Paul devotes his life to waking up others and bucking the very authority that once empowered him. In turn, he’s persecuted, locked up, and martyred for his beliefs.

Keef, too, sacrifices his position, spurred on by his newfound vision. When the comic convention finally arrives, Keef walks on stage prepared to promote Toast-N-Butter. Instead, he melts down, feverishly firing off on a number of issues pertaining to race and identity—issues that he’d earlier so quickly dismissed. “Reality matters,” he implores, “And when you tell me you don’t see color, you are choosing to ignore a very important part of who I am.” He challenges his audience to confront “systemic oppression of people of color in this country,” just as he has, to question a system that they participate in and benefit from, just as he had. He tears apart the set—literally biting and swinging at cardboard cut-outs—denounces Toast-N-Butter and his fan base, and, of course, in doing so, sabotages any chance of syndicating his strip.

But that’s the point of their message, both Keef’s and Paul’s: in order to open yourself to the truth, you have to detach yourself from the trappings of society—especially when those trappings are used to oppress others. Becoming "woke" means more than seeing in a new light; it means renewing your vision of society and your role in it. Because conversion doesn’t happen in a vacuum. There is a bigger world into which the faithful are reborn. If being “woke” is to mean anything, we’ll eventually need to contend with the realities of that world. 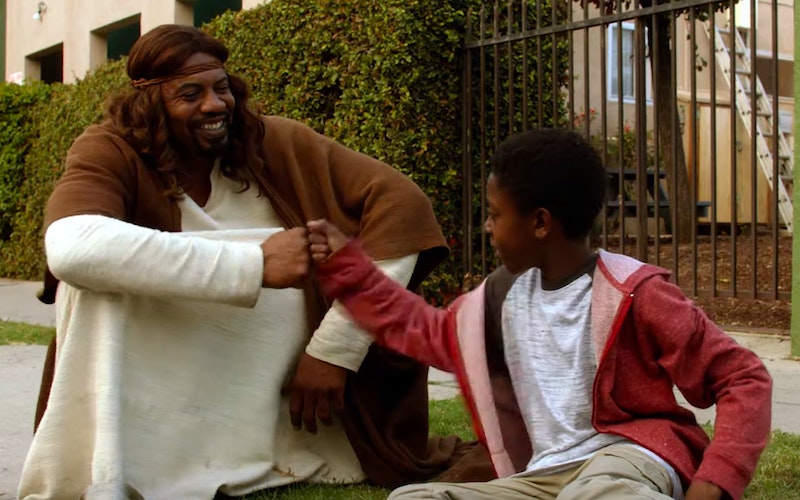