The late-night comedian explains why it's good to laugh at our current political nightmare.

Although it’s a 2015 interview, Stephen Colbert’s conversation with Fr. Thomas Rosica of Salt + Light Media still applies to the current comedic landscape, where pointed political satire is even more the order of the day. In the video, which you can watch in full below, Colbert reflected on a number of questions, including the relationship of his Christian faith to his role as a late-night entertainer. He has never been shy about his Roman Catholicism, but has also never shied away from targeting Christianity. So I was eager to hear Colbert’s thoughts in a context where his faith was front and center as a topic of discussion.

Colbert displayed not only his characteristic wit but his theological chops. For example, when quizzed on the relationship between faith and reason, he rightly pointed out the limits of reason and argumentation. Noting the limitations of Anselm’s ontological argument, Colbert suggested that it is not logic but love of the world and gratitude for life that leads us to God. He also referenced the doctrine of the two natures of Christ (divine and human) as leading to the conclusion that Jesus—as fully human—certainly laughed and had a sense of humor, even if that is not stated specifically in the gospel.

But the overwhelming theme that came through in the interview was a profound emphasis on joy. In regard to the persona created by Colbert on The Colbert Report, Rosica posed an interesting question: are there limits to political satire? In response, Colbert asked, “What is the goal of political satire?” For him, it’s not to change things. Rather, the goal is simpler and more straightforwardly aligned with the goal of comedy in general: to make people laugh and bring joy by creating a connection between the performer and the audience. Laughter, humor, joy—these are release valves as we experience the incongruities of life. Comedy connects and thus produces the joy of solidarity, even if it is a solidarity borne out of frustration.

Later on in the interview, Colbert continues the theme of joy, waxing philosophical by summarizing C. S. Lewis, who outlines four different sources of laughter in The Screwtape Letters. The first three—joy, play, and the joke proper—are all good things. A fourth, however, is what Colbert/Lewis classifies as “flippancy.” In this context, people don’t actually make jokes but simply talk about serious subjects in a way that already assumes there is a ridiculous side to things. This flippancy distances people, does not increase affection, and, in Colbert’s words, “armors the soul against joy.” Clearly, Colbert has thought about his craft from a theological perspective.

Notably, joy doesn’t mean that life or work is always easy. There were days, Colbert reflected, when he and his staff saw The Colbert Report as a “joy machine.” The goal was joy, but the task of producing that joy was hard. So what kept them going? According to Colbert, it was the communal sense that “doing something joyfully doesn’t make it easier; it makes it better.” In other words, it’s precisely the hard things that we should approach with joy.

What if laughing with Colbert at the farcical frustrations of contemporary politics is way of joining the laughter of the divine?

It’s rare to hear a top-level comedian and entertainer so intellectually astute and articulate about their faith, so just listening to Colbert was a real treat. I’ve worried before on TC about the overall effect of political satire by Colbert, Jon Stewart, and company, and as I listened to this interview, I wondered how much of Colbert’s brand of satire could indeed come under Lewis’ rubric of “flippancy.” If the goal of political satire is, as Colbert asserts, not to make a difference, then at what point does our laughter start to slide into the scorn of jaded despair? Given the stark political differences of our current landscape, do endless jokes really increase affection across the political aisle? When I think about the hardened stances of Americans on both right and left, “joy” is hardly a word that comes to mind.

But I wonder if Colbert touches on a theological solution to our often joyless politics. In the interview, he noted that he is more than willing to make fun of Christians and the church. Nevertheless, he also noted his refusal to make jokes about the Eucharist. Though Roman Catholics and many Protestants have debated about exactly how Christ is present in the Lord’s Supper, both hold that Christ is with us in that moment, and that is not something to be laughed about or taken lightly.

But if good theology restricts us from laughing at Jesus’ special presence in the Lord’s Supper, then certainly a good feature of proper worship is laughing with Jesus. After all, as Psalm 2 begins, “Why do the nations conspire and the peoples plot in vain? The kings of the earth rise up and the rulers band together…” What is the divine response to this? “The One enthroned in heaven laughs; the Lord scoffs at them.” Now, I’m not saying that we treat our politics lightly or as a matter of indifference, but I am saying that if we can’t take heaven’s perspective on earthly politics, earthly politics will feel like hell.

So what if the joy of Colbert’s consistent, unrelenting satire is rooted in his participation in the Lord’s Supper? What if it’s his worship that sustains his pointed comedy, even when many of his followers turn jaded and cynical? What if laughing with Colbert at the farcical frustrations of contemporary politics is a way of joining the laughter of the divine? What if our laughter and joy is indeed a way of forging and showing a connection—a truly shared Spirit—between Jesus and us? So when it comes to politics, go ahead. Be frustrated. Be angry. Get involved. But also make time to laugh, for the true King laughs with you.

Why I’ll miss the religious mockery of The Colbert Report 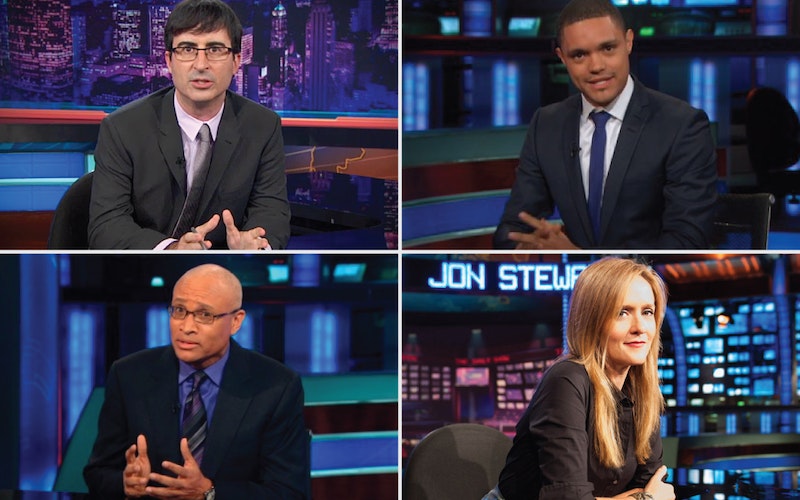 Is it a good thing that Jon Stewart’s minions are multiplying?