In their emphasis on the unexpected, events like Peter Pan Live! and Discovery's Eaten Alive echo the surprise of the Incarnation.

A funny thing is happening in the medium of television. We are seeing more and more of something that was popular in TV’s early days: live events.

This trend is likely influenced by two other developments: the accessibility and popularity of streaming and time-shifting technology, which makes it more convenient to view programming after it has been broadcast; and the practice of “live tweeting” or using other social media to comment on media events as they happen. Given these two developments, there are plenty of people who will not tune in for their favorite show when it airs and will instead binge-watch it after the whole season is over or catch it on a DVR later. They might, however, watch a live event like the Golden Globes, a sports event or a live musical so they can talk about it with their friends online.

Two recent programs drew attention to the appeal of live broadcasts. I couldn’t resist tuning in to NBC’s airing of Peter Pan Live!, while I cautiously avoided Discovery’s Eaten Alive, whose star promised to be swallowed whole by an anaconda while wearing a special suit.

In both cases, folks tuned in partially for the excitement of a live event - anything could happen! It might be amazing! It might be terrible! Either way you have something to talk about and a shared experience of … something. That hope for the unexpected, the near-guarantee of the unexpected, is what draws us in. Ultimately, the snake-food host abandoned the task, fearing injury. The Peter Pan musical didn’t have any major mistakes, and generated some debate about race and gender when it comes to casting. But any outcome would have been exciting, because it was happening live before our eyes.

This sense of the unexpected reminds me of the Incarnation and Advent. God’s always had a way of doing things folks don’t expect - conquering cities by marching and yelling, for instance, or choosing unlikely heroes like King David and the judges. Coming to live among people as a person Himself is maybe the most surprising of all, and the excitement didn’t end there. Jesus did stuff people didn’t expect all the time. He was a Live! Event! And it definitely got people talking. I think God knows how much live, real-time stuff gets our attention and draws us together in community. And I think He knew a live and in-person appearance would pull His people together and give them a way to talk about who He is.

Unlike our live TV events, we are still talking about the Incarnation. Few will likely remember much about the failed anaconda swallowing or Christopher Walken’s Captain Hook. But here we are, centuries later, remembering Jesus’ unlikely appearance as a human. And not just a human, but a baby, born in a humble stable in Bethlehem. How unexpected! Who saw that coming? No wonder the shepherds told everybody they knew.

Bethany Keeley-Jonker is an Assistant Professor of Communication Arts at Trinity Christian College in Palos Heights, Ill. She lives nearby with her husband Justin and their cat Zeus. / Photo via NBC, with illustration by Jerod Clark. 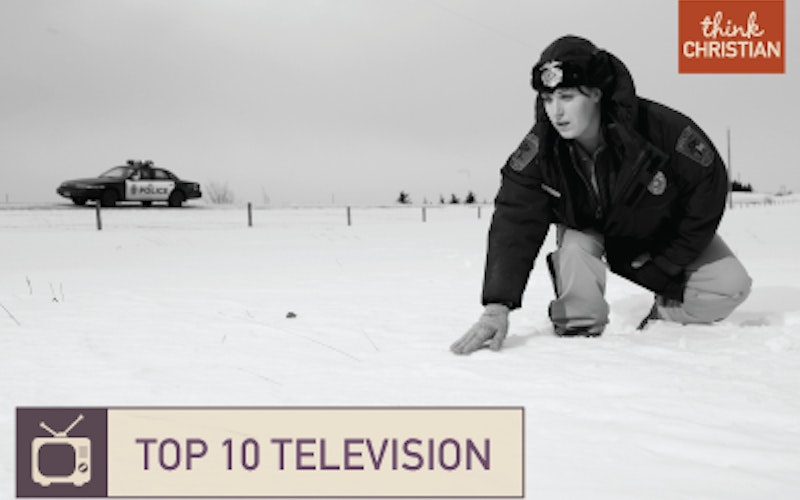 Faris, The Flash and Fargo: the top ten television shows of 2014

Binge-watching TV and seasons of the church