The Nazi-hunting series plays with biblical concepts such as vengeance, justice, and grace.

Hunters is an ambitious Amazon series loosely based on true events about Nazis who secretly infiltrate the United States. The show takes place in 1977 and follows a group of Jewish immigrants who survived the Holocaust, then form a team to track and hunt undercover Nazis. Their goal is to take justice into their own hands. Hunters is a deep dive into the complex moral relationship between grace and vengeance.

Jonah Heidelbaum (Logan Lerman) is introduced to us as a young person who sells weed to make money and doesn’t see Darth Vader as a villain. In his opening scene, Jonah and his two closest friends are exiting the movie theater after seeing the original Star Wars. Jonah argues that villain Darth Vader “did some bad [stuff], but Darth Vader wasn’t born Darth Vader. . . . he was conditioned to believe that some evil Jedi rebels from some desert were gonna come bomb his parents, behead his friends, kidnap all the hot galactic chicks. . . . Vader doesn’t get up every day looking to destroy the galaxy. No, no he gets up every morning believing he needs to save it.” His friend interjects, “But he murders people.” To which Jonah replies, “So does Batman.”

It’s clear that Jonah wonders if people who are universally labeled as evil are truly amoral or if morality depends on one’s perspective. He presents the idea that even good guys kill people when the situation calls for it.

Jonah’s seemingly average existence is quickly challenged by a life-changing event: the unexpected murder of his grandmother (his “safta”). This kickstarts Jonah’s true moral dilemma between showing grace or taking vengeance. In his grief-fueled anger, he joins a group of Nazi hunters led by a man named Meyer Offerman (Al Pacino). Meyer becomes a compass for Jonah in his toughest times, but Meyer’s own moral sensibility is affected by his personal experience as a Holocaust survivor. It is Meyer who tells Jonah, “It takes strength to purge the world of the evil you hate.” However, Jonah’s safta, a Holocaust survivor herself, encourages him that “everything you do is a choice between licht un finster. Light or darkness. You must choose well.” Therein lies the rub. Jonah is given an understandable rationale to avenge his grandmother’s death, but is he really a killer or does he have it in him to show grace?

Hunters is a deep dive into the complex moral relationship between grace and vengeance.

Grace can be defined as undeserved favor and, to be honest, we all need a little bit (or, for most of us, a lot) of it. Thankfully, God hands out grace in spades. Abraham had a bit of a lying issue, yet was granted an amazing covenant with God that gave birth to the chosen people of Israel. Moses was a murderer, but was still chosen by God to lead the Israelites to the promised land. David committed adultery and yet is known as a man after God’s own heart. We need to hear the grace echoed in these stories, especially as we process tragedy, injustice, and loss. Although humans can’t exemplify the immeasurable grace of God, we are still called to try.

It’s important to note that grace does not mean the absence of justice. God did show those people grace, but there were also consequences for their actions. Moses was isolated from his people for many years after the murder. David lost his son after committing adultery. The line between grace and justice is taut. Hunters portrays this line with many encounters between Jews who were tortured and their torturers, encounters in which the dynamic of power has been flipped. In another case, a Nazi who formerly tried to kill a Jewish character now stands on the other side of a gun, which empowers the “hunter” to either kill them or turn them in to the authorities.

Grace or vengeance. This is the crux of Jonah’s dilemma. He did not experience the Holocaust himself, but he knows a few things about injustice. Murder has destroyed his family, a family that had already suffered Nazis and their evil. And evil needs to be eradicated. Jonah wants to be the vessel for vengeance, but God says that “it is mine to avenge.” Jonah’s safta wants him to keep his hands clean and to choose grace, appearing throughout the series as a visual conscience, giving him advice while he wrestles with this internal conflict. The series grounds itself in realism by having the apparition of safta looking as she always did, blurring the lines between the past and the present. The show also utilizes black-and-white flashbacks to illustrate the hardships experienced in the characters’ pasts, particularly during the Holocaust, helping the viewer understand the hunters’ thirst for vengeance.

Still, while we understand that thirst, there is an alternative to Meyer’s philosophy. He may argue that “it takes strength to purge the world of the evil that you hate.” But it also takes strength to allow our enemies to live. This is the strength of grace. Yes, they deserve to die. They should be brought to justice. And yet . . . in the end, God calls us to respond in grace while he provides justice. We can be good bearers of light when we live this way. In our own lives, we experience injustice on personal and societal levels. When we are wronged, can we demand justice but refrain from vengeance, and ultimately ask for God's strength to be agents of grace?

The most impactful takeaway from this series for me was when I realized that I am the one in need of grace. I may or may not scale to the likes of Hitler in the wrongs that I have committed, but I need grace all the same. God isn’t one who counts our sins and weighs them before letting us into heaven. Instead, he sent his son to die for us in the greatest display of grace of all time. So, in response to God’s grace, let’s seek to show grace. As Jonah’s safta reminds him, “Everything you do is a choice between licht un finster. Light or darkness. You must choose well.” So, when confronted with an opportunity for vengeance, we should pray for strength to instead choose justice and grace. 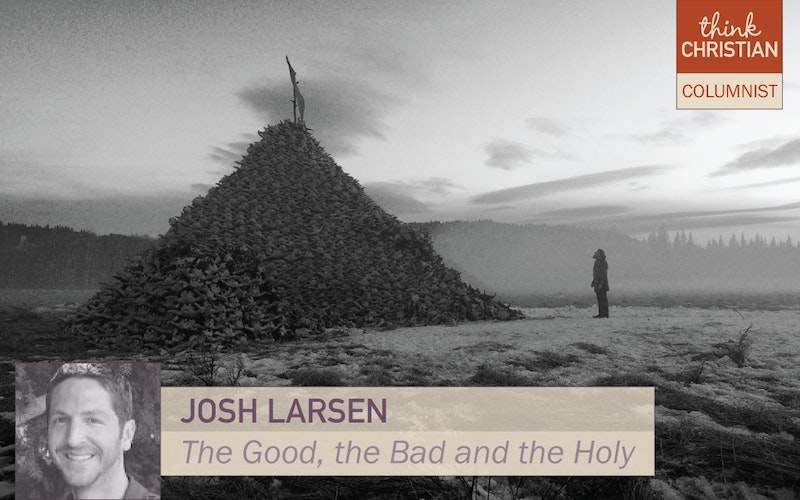