The heroes of the Netflix action flick could use some Pauline encouragement: “Let us not become weary in doing good…”

From the first seconds of Netflix’s The Old Guard, we learn one thing about its protagonist: she is tired.

“I’ve been here before,” Andy mutters. Her voice-over accompanies images of her crumpled on a concrete floor, an attacker’s flashlight illuminating her bullet-riddled body. “Over and over again, and each time the same question: ‘Is this it? Will this be the one?'” The screen cuts to black as Andy spits out: “I’m just so tired of it.”

Played by a world-weary Charlize Theron, Andy has a reason for her exhaustion. Born Andromache the Scythian centuries ago, Andy is one of an extremely rare group of immortal warriors. For no discernable reason, Andy ceased aging and her wounds started healing on their own. Together with Joe (Marwan Kenzari) and Nicky (Luca Marinelli)— enemies turned lovers from the Crusades—and Napoleonic-era Frenchman Booker (Matthias Schoenaerts), Andy helps the helpless by taking on missions no one else can accomplish.

The Old Guard’s commitment to doing good drives them to take an assignment from ex-CIA agent Copley (Chiwetel Ejiofor), against Andy’s better judgment. When the mission goes wrong and the Guard finds themselves exposed and hunted, that commitment compels Andy to seek out a United States Marine named Nile (KiKi Layne), whose newly manifested immortality puts her in danger.

Adapting a comic book series from writer Greg Rucka (who also wrote the screenplay) and artist Leandro Fernandez, director Gina Prince-Bythewood infuses The Old Guard with the same humanity she gave romance classics such as Love & Basketball and Beyond the Lights. This isn’t to say that The Old Guard lacks action. The movie’s visceral set pieces recall the bone-crushing sequences found in John Wick. But for all their spectacular violence, these fights serve as expressions of the characters’ inner turmoil.

We see this principle at work when Andy and Nile face off in a cargo plane. Still doubting her newfound powers, Nile wants to fly back to her military base and resume her life. Tired of trying to convince Nile with words, Andy’s ready to fight. The sequence that follows is thrilling, with Theron and Layne bouncing along fuselage walls and lunging at each other as the plane swirls through the air. But the thrills stop brutally short when Andy breaks Nile’s forearm and shin. Prince-Bythewood shows us Nile’s injury in bloody detail, then shows us how Nile heals, as her bones slide back into place and the tears in her skin join together. Volker Bertelmann and Dustin O’Halloran’s score rises as peace replaces resentment in Andy’s expression. She sits with Nile and reassures her. Andy’s lost too much, too long ago, to completely empathize with Nile’s realization that she’ll never see her family or friends again. But she doesn’t act with blunt cruelty, either. She stands, extends a hand, and returns Nile to her feet.

At that moment, Andy has a purpose. She saw a need in Nile and she gave what she could. She helped Nile find direction. The absence of such clarity made Andy haggard earlier in the film. Her life had consisted of little more than wars and rumors of wars. Despite generations of trying to do right, the world never gets better. The resignation that crosses Andy’s face as she watches news reports about violent protests and civilian casualties reminds us that she’s tired of doing meaningless good.

None of us are immortal soldiers, but every Christian has likely shared Andy’s exhaustion. We believe that we can do all things through Christ who strengthens us and we affirm that Christ has overcome the world. But sometimes it seems as if our actions do not matter. Every day, we’re faced with unending wars, unjust actions, and uninhibited evildoers and we cry out, “How long, Lord?”

But Scripture gives us hope to respond to our frustration. “Do not be deceived,” Paul writes in Galatians 6. “God cannot be mocked.” That statement has an air of threat to it, especially when paired with this: “Whoever sows to please their flesh, from the flesh will reap destruction.” But Paul then goes on to put our actions in a larger context: “Whoever sows to please the Spirit, from the Spirit will reap eternal life.” The things we do matter, Paul assures us, even when we can’t see the effect. Our actions are the tools that Christ uses to restore the world to God’s intention. “Let us not become weary in doing good,” Paul urges, “for at the proper time we will reap a harvest if we do not give up.”

The Old Guard suggests that, despite her relative youth, Nile understands this truth in a way that Andy does not. Before they take to fighting each other, Nile responds to Andy’s lack of answers about her powers by closing her eyes and joining her hands. Andy sneers at her praying and states, “God doesn’t exist.” Nile shoots back, “My God does.” It’s a declaration the film seems to endorse. Andy and the other members of the Guard may not know why they became immortal, they may not understand why they’re drawn to one another, and they certainly don’t see the fruits of their labor. But by the end of the film, they come to understand that the good that they do matters. The people they help go on to help others, in ways that they, for all their years and experiences, couldn’t imagine.

Even after this revelation, Andy remains tired. As Booker tells Nile when she tests her strength by putting her hand in a fire, "Just because we keep living doesn't mean we stop hurting." But even in the hurt and exhaustion, they briefly see the way they've helped others. That realization can give hope for even us regular people—weary but determined to continue doing God's good work.

The Invisible Man (in the Sky)

Harley Quinn and Degrees of Sin 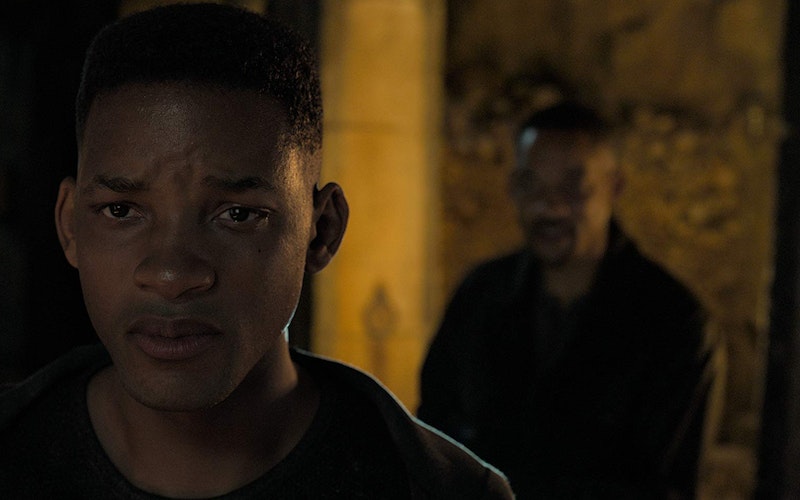 Gemini Man and the Action of Confession