There are many poignant moments in Time, a quietly expansive documentary about a Louisiana family’s long-suffering experience with the criminal justice system. But one moment nearly wrecked me.

It involves a conversation during a car ride between Sibil Fox Richardson (aka Fox Rich) and her son Remington, who is 5 at the time. Their talk was recorded in 1999, the year Fox’s husband (Remington’s father) was sentenced to 60 years in prison for armed robbery. With wide-eyed self-confidence, young Remington addresses his mother as she holds the camera, expounding on his plans to take on new responsibilities now that he’s starting school:

“I’m gonna say, `Mama, you don’t need to hold that. Let me carry it.’ ‘Cause I’m your kindergartner. And then you put it in my hand. . . I carry it wherever you tell me to take it.”

We don’t know what “it” was for Remington in 1999. But we do know that shortly after this recording, Fox will spend several years in prison for her part in her husband’s crime. While she’s away, Remington will have to help his grandmother care for his younger brothers. So when Time director Garrett Bradley suddenly cuts from that grainy home video to a much more recent shot of Remington, now fully grown and at dental school, “it” registers as nothing less than the burden of time itself—of having spent his most formative years faithfully standing by his mom as she leads their emotionally waylaid family.

Time, now streaming on Amazon, is full of such juxtapositions between the past and the relative present. But that one hit me hard, both as a parent and as a restored citizen. Although I’ve written previously about the difficulties families face when a loved one is in prison, this film confronted me with those realities firsthand. And when I tried imagining my own son in Remington’s place, it renewed my gratitude that I hadn’t yet become a father on the day I was sentenced.

The documentary follows the family’s Sisyphean battle for Rob Rich’s release, eschewing linear storytelling in favor of a circular chronology that captures something of what it feels like to have time penally hijacked. By constantly setting Fox’s home videos against present-day footage—and rendering all of it in ethereal, grayscale tones—Bradley (together with editor Gabriel Rhodes) visually approximates a kind of suspended animation, in which events flow backwards and forwards at once. Young faces become indistinguishable from their older counterparts as past and present elide in a contextually disorienting experience that will feel eerily familiar to anyone touched by incarceration.

But the scandal of Time is that it isn’t Rob—the one behind bars—upon whom this temporal malice falls. In training her camera on the ones Rob left behind, Bradley demonstrates how they’re effectively serving the same sentence, only from the other side of the razor wire. And that’s where Christians might detect something biblically familiar about their plight.

The doc visually approximates a kind of suspended animation, in which events flow backwards and forwards at once.

Watching the long uninterrupted shots of Fox staring at her phone, waiting for court clerks to provide overdue updates on her husband’s case, I was struck by how closely Fox’s experience parallels that of the widow in Luke 18. There, Jesus describes a corrupt judge who ultimately gives a nagging widow the justice she seeks simply to shut her up—a story sadly rooted, like all Jesus’ parables, in circumstances his listeners would have recognized. The widow has to nag because, even though God had given his people instructions on how to treat widows and orphans since the days of Moses, people in positions of power had repeatedly failed to uphold them, including in Jesus’ own day. The widow in Jesus’ story might very well have been someone like Fox, relentlessly petitioning for mercy in the face of systemic oppression.

Indeed, it doesn’t take much imagination to see how system-involved families like the Richardsons are but a modern variant of such unfortunate figures in the Bible. In both cases, innocent people find themselves socially and economically displaced as the result of a family member’s sudden removal. Working-class mothers face destitution without their husbands’ income, even as they’re encumbered with new expenses (like high-priced collect calls) to maintain long-distance relationships with their spouses behind bars. Children frequently assume premature responsibilities at home, and many forego higher education to take on jobs to support their families. Meanwhile, everyone bears the stigma of having a loved one in jail, and some experience serious mental health issues.

As Christians, we can’t ignore such things, because God is passionately concerned for the vulnerable. The psalmist calls God “a father to the fatherless, a defender of widows.” Jesus identifies so closely with such people—including prisoners and their families—that to serve them is to serve him. It’s why James explicitly links care of orphans and widows to “pure and faultless” religion; in coming alongside such individuals, we approach the very heart of God.

Early in Time, we learn that Fox was pregnant with twins when Robert left. In good prophetic form, she named them Freedom and Justus. During one of the film’s more bittersweet moments, we see Justus as a beaming, energetic toddler, learning to pronounce his name. From behind the camera, Fox corrects him: “Your name is not Justice. It’s Justus.”

“Just us.” Fox chose that spelling because she and Rob felt wholly alone with the magnitude of what they were facing. But somewhere along the line, they learned that their devotion to one another would be sacrificially reinforced by others’ faithful devotion to them. “I’m thankful for a community of people that are willing to love us through it all,” Fox expresses to an assembly of friends and relatives during the film’s emotional finale. “And through it all is how we get there.”

We don’t have to look far to find people equally desperate for that kind of companionship. Time reminds us that they’re as near as the two million system-involved families—spiritual orphans and widows—quietly suffering in our own communities. If we’re serious about drawing closer to Jesus, we can begin by drawing closer to them. 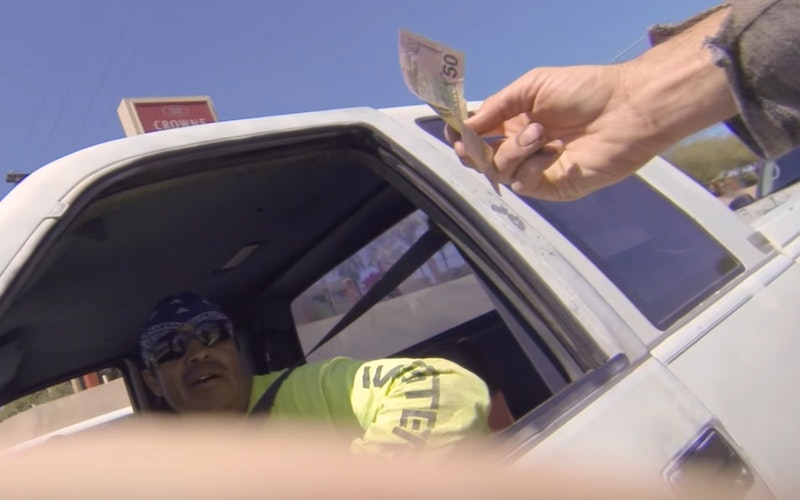