The historical drama suggests that if Christians want to do justice, we must move toward suffering, not away from it.

Theologian Dorothee Soelle wrote that “suffering makes one more sensitive to the pain in the world … it teaches us to put forth love.” Just Mercy, based on the true story of a falsely accused death-row prisoner, considers the immense and unjust anguish of that man, as well as the determined love of the lawyer who fought to bring his case to justice. In the process, the movie reminds us of the cruciform power of solidarity with those who are suffering.

Bryan Stevenson (Michael B. Jordan) is a Harvard-trained lawyer who gives up the income, power, and position of his pedigree to move to Alabama and defend people on death row. Early on in the movie, Bryan, as part of an internship with a prisoners’ rights group, has a profound encounter with a young black man on death row named Henry (J. Alphonse Nicholson). Henry and Bryan are about the same age and spend hours bonding over their shared roots in the choirs of their childhood churches. The encounter changes the trajectory of Bryan’s life. Rather than choose the path of prestige laid out for him, he chooses a more humble path serving the poor and marginalized.

Throughout the movie, Bryan moves towards those who are suffering, when the natural response would be to move away. When his mother expresses her concerns about him moving down South, where he’ll face the death risk posed by Southern racism, Bryan responds that she always taught him “to fight for the people who need it the most.” This fight will cost him. He is humiliated by a prison guard who forces him to undergo an unnecessary strip search. He is harassed and threatened by police officers because of his work on behalf of men on death row. Yet, in the face of both humiliation and violence, he remains steadfast.

After suffering a setback in court at one point, Bryan shares his frustrations with his coworker, Eva (Brie Larson). She tells him that while she previously maintained a healthy distance from the people she helped, Bryan had taught her to see them as family. “When your family hurts, you are hurting too,” she reminds him, adding that to keep a safe distance from suffering is “bull****!” It is Bryan’s presence that makes him an effective advocate.

Just Mercy also warns us that presence is different from proximity. The case at the heart of the film—in which Walter "Johnny D" McMillian (Jamie Foxx) has been convicted for murder—takes place in Monroeville, Ala. The black families of Monroeville are virtually invisible to their white neighbors. The black community rallies to Johnny D’s aid in part because they realize the only time they are seen is when it comes to time to “solve” a crime. As one character says, “You can be in your own home, raising money for the church, and they can pin a murder on you.” Ironically, Monroeville has a museum about To Kill A Mockingbird, the novel in which a white lawyer defends a falsely accused black man. The white people in Monroeville, including the prosecutor and the sheriff in Walter’s case, are happy to celebrate a fictional story of justice, even if they have no intention of pursuing justice in real life. They are proximate, but nearness alone is not enough.

Just Mercy warns us that presence is different from proximity.

In Just Mercy, Bryan not only moves toward those who are suffering, but he makes sacrifices—forsaking a more lucrative career, encountering abuse and discrimination, even risking his own life—to help alleviate their suffering. Many of us want to see ourselves in Bryan Stevenson, but the truth is that very few of us move toward suffering the way he does. We might tweet about injustice, post a Martin Luther King Jr. quote, attend a movie like Just Mercy, or read an article like this. Those may be good things, but they’re not the same as the self-sacrificing and costly work of being present with and pursuing justice for our marginalized neighbors.

Most of us want to be Bryans, but the truth is we are not. No, we are more like Herbert (Rob Morgan). Herbert is another client of Bryan’s, but unlike Johnny D he is actually guilty of the crime that landed him on death row. No one offers Herbert any mercy or help, despite the PTSD he suffers from the Vietnam War, which played a part in his crime. On his execution date Herbert laments that “more people have asked me how to help today” than at any other point in his troubled life. As Herbert is strapped to the electric chair, the other inmates chant his name and bang on the bars to demonstrate their presence with their friend in his final moments. As the sound of the inmates crescendos, Herbert’s final request is honored: “The Old Rugged Cross” begins to play over the prison’s speaker system.

Herbert is guilty just as we are guilty. But unlike the brutal and often unjust criminal justice system, Jesus offers a glorious display of sacrificial mercy. As the song Herbert chose testifies, “And I love that old cross where the dearest and best / For a world of lost sinners was slain.” The Son of God humbled himself, becoming obedient to death, even death on a cross. Immanuel means “God with us”—not “God associated with us” or “God casually observed us.” God endured our suffering and shame, and because of his self-sacrificial love we exchange our condemnation for a crown.

This is our salvation and also our model. Jesus demonstrated what it means to put down our privilege and choose the self-sacrificial way of love. Through his humanity, Jesus teaches us a new way of being human: moving toward suffering, offering mercy, demanding justice.

“This is about all of us,” declares one of the posters for Just Mercy. While the film tells the particular story of Bryan Stevenson and Walter McMillian, it is a universal story of brokenness, mercy, and restoration. It is only in rightly seeing ourselves and our own need for mercy that we can begin to move toward the suffering of others. Just Mercy challenges the notion that Christianity is to be a suffering-free religion. The movie reminds us that our modern desire to avoid suffering impedes our ability to do justice, to truly love our neighbors, and live into the self-sacrificial love of Christ.

Masking Our Pain in Watchmen 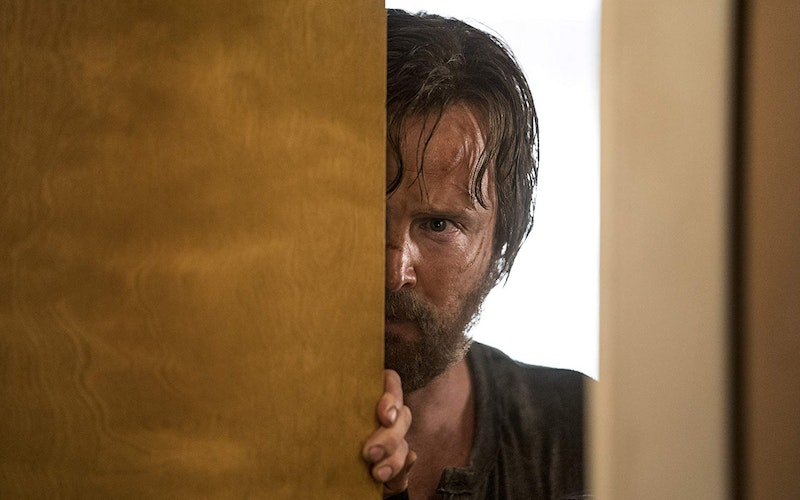 El Camino and the Way of Repentance