The Farewell Drifters' Tomorrow Forever deserves the attention of anyone interested in intelligent and emotionally accessible Americana pop.

The Farewell Drifters recently unveiled their label debut, Tomorrow Forever, a complicated bit of nuanced Americana music that simultaneously looks forward, backward, without and within for moments of true connection, honest intimacy and overarching purpose.

I’ll admit to having little in the way of objectivity when it comes to this band. They are friends and compatriots. They even graciously agreed to back up my band on one track from our Spiritual Songs record a few years back. That certainly doesn’t mean I’m wrong, however, when I say that this latest project deserves the attention of anyone interested in intelligent and emotionally accessible Americana pop.

The Farewell Drifters have released a string of interesting independent records since their inception over eight years ago. But now, with the backing of Compass Records, the boys swing for the fences by crafting the most confessional record of their productive career. All but the faintest traces of their string band roots are gone. While building on that DNA, the band luxuriates in the world-changing folk pop of Simon and Garfunkel or Donovan, blended seamlessly with the sweet pop notes of mid-period Beach Boys, Rubber Soul-era Beatles and relative newcomers The Decemberists, The National and Fleet Foxes. Their instrumental palette has swelled to include full drums, interesting organic keyboard elements, tasteful electric guitar chimes and hip production flourishes. It seems they were a few beats ahead of the latest roots music revival; just as the scene moved toward hillbilly music, these guys start dabbling in transcendental pop.

The boys swing for the fences by crafting the most confessional record of their productive career.

While the instrumentation, songwriting and production by Neilson Hubbard are the best of the band’s career, the revelation for me on this set is more lyrical than instrumental. Primary songwriters Joshua Britt (backing vocals, banjo, mandolin) and Zach Bevill (lead vocals and acoustic guitar) immediately dive into the deep end of the soul. The songs are those of postmodern troubadours trying to make sense of their dreams and come to grips with their roots. They have skipped past the niceties and dug right into the meat of the thing. Like that earnest person at the party who actually answers you when you say “Hey man, how you doing,” Bevill and Britt seem eager to peel back some layers. They explore the challenges of life on the road, the fractious relational landscape foisted upon us by social media, the simple joys of young love and the pain that comes from seeing a seasoned relationship settle into a routine. Amidst it all is “Neighborhoods Apart,” a meditation on a critical boyhood friendship that faded into fumes under the strain of innocence lost. Bevill’s normally refined tenor just about comes unglued as he pleads with God to understand how best to respond to a person in pain. You can hear the microphone shake as he practically screams a prayer for his hurting friend.

Tomorrow Forever is at times wistful, romantic, desperate, melancholy, soulful and spirited. It reflects the essence of what so many people love about our current and much-needed roots music revival, but with no suspenders or handlebar moustaches needed. This soft-spoken confidence may not have enough swagger to win over the intelligentsia, but for a slice of American songwriting that cares more about heart than image, you can’t do much better.

“JJT” has been chasing the thread dangling between eternal truths and temporal creative experiences for nearly three decades. He is a writer, a businessman, a father, an artist and a seeker. Read more about him at JohnJThompson.com. / Image via Compass Records, with illustration by Jerod Clark. 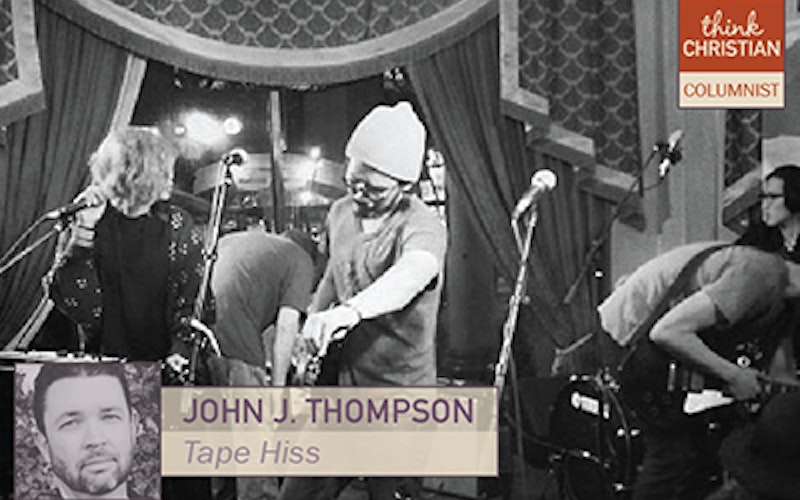