The web series finds the comic and actor at his most disheveled—physically and emotionally—holding forth with celebrities from Barack Obama to Bruce Willis, Sean Penn to Natalie Portman. More conversational torture chamber than Q & A, Galifianakis strings together half-baked questions, non-sequiturs, and verbal volleys that range from the cringeworthy to downright cruel. His guests prove their mettle and good humor, playing along with all the jokes and jabs.

Dating all the way back to 2008, as online discourse and social media were rounding into misshapen form, Between Two Ferns felt practically prophetic. Galifianakis and company drew out all the absurdity of celebrity culture and laid bare the sort of sparring that often passes for journalism.

A new full-length Netflix movie furthers that focus and holds a mirror up to our modern discourse—or lack thereof. Between Two Ferns: The Movie yields mixed results reminiscent of many Saturday Night Live sketches stretched to fit the big screen back in the 1990s. Everything that happens between the ferns delivers warped delights; everything beyond them wobbles. The film, directed by Scott Aukerman (Comedy Bang! Bang!), can’t decide if it’s a mockumentary, road-trip movie, or something else altogether.

After a moment of public disgrace—and the temporary “death” of guest Matthew McConaughey—Galifianakis and his crew hit the road in search of celebrities to interview. The host plays a ludicrous version of Robert Johnson at the crossroads. The devil? Will Ferrell playing an outsize, coked-up version of himself. The deal? If Galifianakis delivers 10 new episodes, he earns a gig hosting his own talk show on the Lifetime network (after beseeching Ferrell for a “lifetime network” job).

On the road to redemption, Galifianakis mocks Chance the Rapper for his name and Jon Hamm for a supposed lack of smarts, makes Brie Larson highly uncomfortable and razzes Paul Rudd for obscuring his Jewish heritage.

Per usual, Galifianakis is the one truly playing the fool. Early on, Ferrell alleges the audience laughs at Galifianakis, not with him. But the truth is more complicated. The character of Zach Galifianakis, especially as played out here, doesn’t offer much to root for. Yet we see something of ourselves in him, even as we jeer. And the more time you spend Between Two Ferns, the more this feels intentional.

Dating all the way back to 2008, as online discourse and social media were rounding into misshapen form, Between Two Ferns felt practically prophetic.

Galifianakis acts as a twisted proxy for an audience both bemused by celebrity culture and bored by its lack of depth. Drill deeper, and you notice he resembles the church’s line of holy fools. These strange saints tell the truth about the nature of God and the narrow way through the appearance of insanity. Acting outside the bounds of what’s socially acceptable—as Galifianakis does early and often—they break a sort of hermetic seal, allowing us to see that holiness and communion with God truly requires being set apart. In their extremes, they reflect back to us sins we take for granted and drive home our need for the divine.

Galifianakis isn’t up to anything holy here, at least not consciously. But in his willingness to mock and be mocked, he skews our perspective just enough to see ourselves—and our love for our neighbors, or lack thereof—from a different angle. In his exaggerated indifference and cartoonishly poor manners, we begin to recognize the contours of our own poisoned discourse. The gap between a Christian practice of conversation and what we’ve settled into appears wide. We might never say the things Galifianakis does aloud, but we speak carelessly. We fail to really listen, biding time until our next turn to talk. Sometimes, in the name of "speaking the truth in love," Christians fall short of both parts of that equation.

In a coolly piercing moment, David Letterman diagnoses Galifianakis: “You don’t have the capacity for any sort of empathy or embarrassment.” Sadly, the same could be said of 21st-century America. Spend any time near a comment section or wade into the darker corners of social media, where it’s all talking points and hot takes, and our inability to really dialogue with one another becomes acute and painful.

Christians know of a better way, but do we walk in it? The Holy Spirit does what no amount of willpower can, taming our wild tongues and freeing us to move beyond the sort of stubborn double-speak we so easily slip into. When the way of Jesus grips our hearts, we enter conversations more interested in hearing than being heard; love for our neighbors entails believing the best about them, in our actions and our speech.

Galifianakis’ foolishness isn’t merely for our temporary pleasure, but our lasting good. We laugh at the ludicrous words which come out of his mouth, but, when the laughter ends, we’re left with questions. How often does our conversation fail to connect? Does our speech build up or cut people deep, denying their humanity? Do we talk just to hear ourselves or as a means to understanding, and thus loving, our neighbor?

If all we want is to speak our minds and walk away, we’ll have little use for the holy fools among us. But if we genuinely wish to see ourselves as we really are, to become people who salt their speech with God’s very character, then Between Two Ferns is right where we need to be. 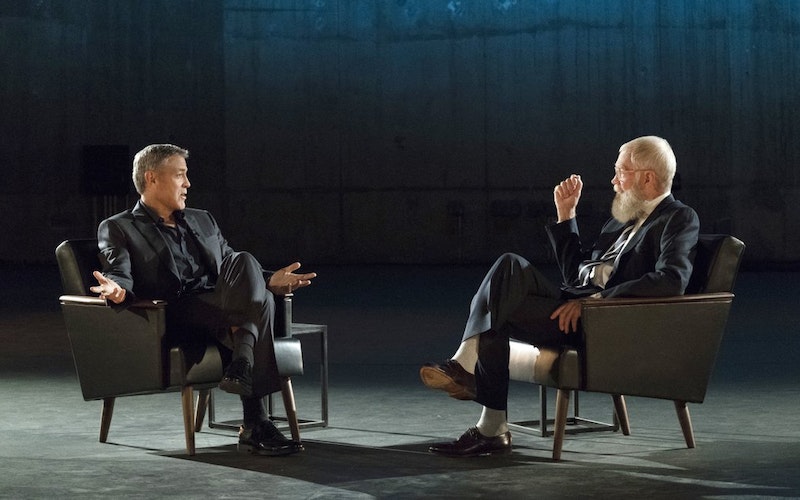