My Next Guest Needs No Introduction is a talk show in search of absolution.

The massive beard tells a story.

David Letterman walked away from the public eye in 2015, after 33 years in late-night television. Now Letterman has returned with a new show on Netflix, My Next Guest Needs No Introduction, and a beard that makes him look like either Santa in the off season or a member of ZZ Top.

The beard is indicative of identity change. It’s well-chronicled that Letterman has been a Grade-A jerk, a sarcastic and occasionally cruel smart aleck who would happily offend guests to get a laugh. Cher famously called him an a****** on the air. I’m sure she meant it at the moment, but it was also part of the act—she returned in the final weeks of Late Show with David Letterman to call him the name again and everyone was delighted.

Backstage revelations, however, have been more disturbing. Former Late Show writer Nell Scovell wrote a Vanity Fair piece revealing the hostile work environment Letterman created. In 2009, Letterman was the target of a blackmail attempt by someone with inside knowledge of his multiple affairs with staff members. New York Times critic Jason Zinoman’s Letterman book praises his genius while exposing his reclusiveness and massive insecurity. An anecdote from Bill Carter’s book about the Jay Leno-Letterman late night war says volumes: One night during a commercial break, Teri Garr, a Letterman favorite, asked how he was doing. Unable to be heard over the band, Letterman simply scribbled on a piece of paper, “I hate myself.” When Garr objected, Letterman took the note back and underlined it twice. He seethed night after night because NBC didn’t give him The Tonight Show and the affable Leno beat him in the ratings, and he took his anger out on himself and those around him.

So what is this self-loathing misanthrope and his giant beard doing on Netflix? Looking for redemption.

The premise of My Next Guest Needs No Introduction is that Letterman goes in-depth with a very famous guest without being bound by the conventions of a normal talk show. After watching all six episodes, however, it’s clear that the show is about Letterman more than his guests. He is profoundly aware that his life passed by while he was fixated on the success of a television show—as ephemeral an object as has ever existed. The social psychologist Erik Erikson postulated the last stage of life as Integrity vs. Despair. Letterman has known despair. He is searching for integrity, and his search is compelling.

It’s clear the show is about Letterman more than his guests.

During the Next Guest episode with George Clooney, Letterman admires how Clooney uses the platform created by his fame to improve the world. There is evident envy and regret in Letterman. During the episode with Jay-Z, Letterman steers the conversation into a discussion of infidelity. It’s hard to tell what Jay-Z makes of the previously emotionally closed old white dude across from him making his confession, but it is touching to hear Letterman’s honesty.

Perhaps the most surprising guest is Howard Stern, whom I think of as loud, lewd, and boorish. The conversation is fascinating as these two wildly successful but broken souls look to each other for validation. Stern is forthcoming as he admits his struggles with rage and obsessive-compulsive disorder. Both Stern and Letterman talk about the progress they’ve made through therapy. The end of the show has absolutely nothing to do with Stern (illustrating again that the show is about Letterman). Letterman appears on horseback (!), riding alongside a conservationist through the disputed Grand Staircase–Escalante National Monument and Bears Ears National Monument in Utah. Letterman is trying to say something, hoping it’s not too late to use his platform.

During Letterman’s interview with Tina Fey, he is looking for absolution for his treatment of women, particularly for not hiring women as writers. When Letterman suggests that women wouldn’t have wanted to write for his show because it was on at 12:30 a.m., Fey says, “Yeah, we do want to write on it.” It’s a brilliant moment. She’s not going to let him off the hook, and her career proves the stupidity and prejudice of the men who were calling the shots.

Who among us doesn’t have things in our past that are sources of guilt, which we stumble over repeatedly? I’m reminded of the powerful scene in Adventures of Huckleberry Finn where Jim confesses to Huck that he had struck his little daughter for not obeying his command to shut a door, not knowing the child had become deaf from scarlet fever. Jim says something to Huck along the lines of hoping the good Lord will forgive him, because he will never forgive himself. What Jim hopes, and what all Christians hope, is that God does forgive the unforgivable. Striking a child feels unforgivable, as does wasting your life. But isn’t this the heart of the gospel? Redemption, Paul says in Colossians 1:14, is the forgiveness of sins.

The experience of forgiveness allows us to make peace with the past, and even more to redeem the past, changing it from curse to blessing. The place of pain can become a place of healing, not just for ourselves but for others. Regret can become a means of grace. Before her death, Letterman’s kind and loving mother Dorothy was a frequent guest on his show. There was always an interesting interplay between sarcastic Dave and his sweet-natured mother, who was the secretary of the Second Presbyterian Church in Indianapolis. David Letterman was raised in the church. I have no idea what he believes these days, but my hope is that he continues his quest for redemption and comes all the way home, to fully embrace the faith and savior he’s always known.

Jeff Munroe is a writer and a pastor for the Reformed Church in America. 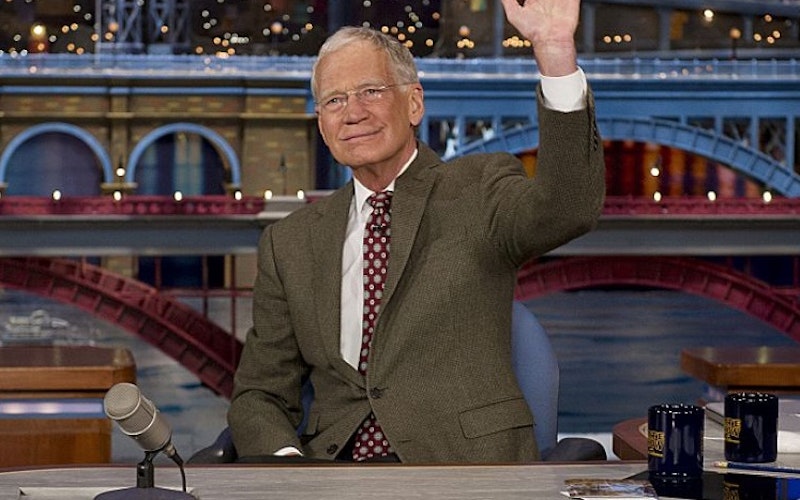