Dunkirk reminds us that what we need we cannot win, but only accept as a miraculous gift.

War movies tend to chronicle one of two things: victory or defeat. The former typically offer triumphant affirmations that a nation’s great sacrifice was worth it; the latter often serve as protest art about the futility of military conflict. Dunkirk offers something different. As a story of rescue first and foremost—of salvation amidst military failure—Dunkirk is at once distinct and familiar, a war-picture anomaly that ultimately recognizes our very personal need to be saved.

Written and directed by Christopher Nolan (Interstellar), Dunkirk dramatizes the 1940 evacuation of beaten British forces from the windswept shores of France. With sparse dialogue, a largely unrecognizable ensemble cast, and an omnipresent Hans Zimmer score that evokes a ticking stopwatch and thrumming propellers, Dunkirk doesn’t tell a story as much as it provides an experience. As unseen German forces bomb, torpedo, and fire upon the hundreds of thousands of soldiers awaiting evacuation, the movie’s main character is fear. And in the face of that fear, we witness instinctual acts of both cowardice and bravery, often from the same person. Take, for instance, the shockingly young soldier who cuts in line to sneak onto a boat and then—not long after—risks his life to open a hatch for those trapped below when the boat is struck by a torpedo.

Dunkirk’s most striking images are those of rescue, a few of which I’ll spoil here. There is that aforementioned hatch, opened by the young soldier, which sends a shaft of light into the rising water in the ship’s hold. In another scene, a British pilot who has been shot down in the English Channel can’t escape his flooding cockpit—until suddenly a harpoon breaks through the glass, held by one of the British civilians who have volunteered their own vessels to help with the evacuation. The movie’s most stirring moment of rescue comes near the end, when a German warplane bears down on the last of the soldiers standing exposed on the beach. A different British pilot, ignoring his depleting fuel warnings, swoops in to chase off the German plane at the last minute. Spent of fuel, he glides over the beach one last time, the battering of bullets and buzzing of engines giving way to a momentous quiet.

We know that this pilot is not veering back toward England for a victorious landing on a welcoming runway. He’s going down. If he survives, he’ll need to be rescued as well.

There is a sense of humility here, one that can even be detected in Dunkirk’s most traditionally “victorious” moment. As the British civilian fleet approaches the shoreline, Zimmer’s score unfortunately forgoes its atmospheric intensity in favor of swelling strings, while cheers erupt from the waiting soldiers. Yet as inspirational as the scene means to be, it still isn’t a depiction of the cavalry coming to turn the tide of battle. These “little ships,” as they’ve come to affectionately be called, better resemble makeshift ambulances.

Dunkirk’s most striking images are those of rescue.

In this way Dunkirk stands in stark contrast to triumphalist military films, where death and sacrifice almost always come in the context of ultimate human victory. Consider Saving Private Ryan, in which the brutality of the opening Omaha Beach sequence is offset by the smaller, personal win guaranteed in the title (as well as the Allied powers’ eventual success, of which the Omaha Beach invasion was a crucial part). Saving Private Ryan, which I greatly admire, nonetheless exemplifies what Christian pacifist Stanley Hauerwas wrote in The American Difference: “We ask soldiers to kill and be killed, and in order to make sense of what they have done we identify them with those patriotic stories that enable us to remember the dead.”

Dunkirk is patriotic too. Certainly that is how the film has been regarded in England, where the evacuation is celebrated as the “miracle of Dunkirk.” But as we’re watching the movie—when we’re experiencing what these soldiers might have experienced, outside of the context of history—a stark truth comes to the fore: in a world broken by our own doing, we can’t save ourselves. (That young soldier who snuck on the ship tries to sneak onto at least two other vessels, and each one sinks.) Even zooming out to consider history writ large, the fact that the good guys won World War II didn’t prevent Korea, Vietnam, Iraq, Afghanistan—to say nothing of the global conflicts that have not directly involved the West. As long as creation continues to groan, our need for evacuation never ends.

Wars small and large are, of course, apocalyptic echoes of the conflict within our own hearts. “What I want to do I do not do, but what I hate I do,” Paul confessed, echoing the strife experienced by even those who try to live a righteous life. In the face of these personal failures, stories of triumphalist, self-salvation ring false, perhaps especially when they’re rooted in military might. What we need we cannot win, but only accept—whether it comes by sea, by air, or by the miracle of the cross.

Josh Larsen is editor of Think Christian, as well as the co-host of Filmspotting and author of Movies Are Prayers.You can connect with him on Facebook, Twitter and Letterboxd. 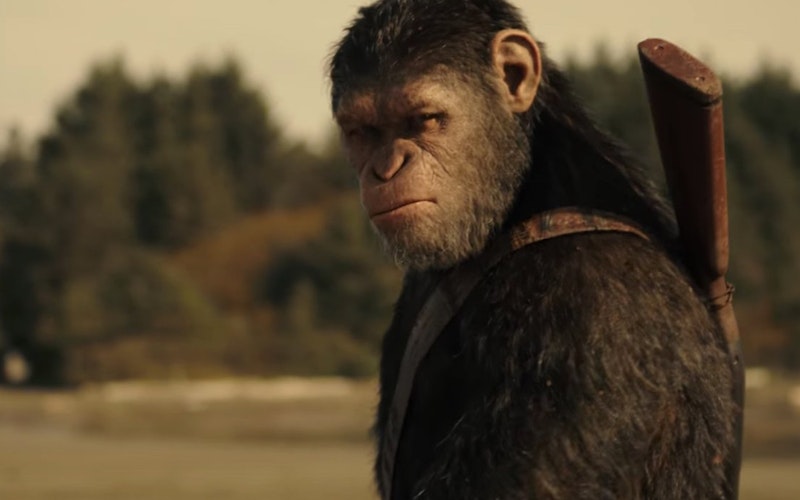 Imago Dei, Eden, and War for the Planet of the Apes