When I think of Jim Carrey, indelible images from Ace Ventura: Pet Detective and Dumb and Dumber immediately spring to mind. So it’s a bit jarring to encounter him today, a couple decades later (Jim Carrey is 55 years old?!), musing on the nature of art and life in the brief documentary I Needed Color. In the course of the video, however, Carrey lets us know that these two sides—the comic and the artist—have always been part of who he is, from childhood on.

The title and content of the piece are intriguing insofar as they pose a key question: is art a necessity or luxury? For many pragmatic Americans (including American Christians), art would seem to be a nice extravagance, a pastime for aging comedians and those who have time and money to pay a visit to a set-apart shrine (museum) for the apparently useless—but pretty—art. Carrey, however, makes a compelling case that art is more crucial than that, and he does so in a way that invites Christians to think deeper about the real purpose of art.

In the opening shot, Carrey intones, “What you do in life chooses you … your vocation chooses you.” In other words, creating art is not an option for artists; it flows from who they are. They are enveloped by a purpose, a vision that compels them and draws them on. Not only that, but Carrey makes it clear that the artist discovers a depth to their own story that happens only in the creative process. That is, as the artist exercises creative power over an externalized creation, they come to understand their own identity. As Carrey puts it, “The painting was telling me about myself.”

For Christians, Carrey is onto something here that speaks to the creational goodness of art. That is, our creative capacity and desire to express ourselves in a variety of ways, including art, is built into the structure of the good world God has made. As Calvin Seerveld notes, human beings have all kinds of needs that are legitimate—clean water, financial assistance, hernia operations … and the need for good art! For art tells a certain kind of truth that cannot be seen or expressed any other way. Because of this, art is not just necessary for artists to produce; it is a necessary part of our humanity that we discern, consume, and produce good art.

Carrey is onto something that speaks to the creational goodness of art.

To be fair, Carrey at times risks reducing art to nothing more than individualistic self-expression. In other words, I need color, and so art revolves around me, the artist. Yet there is also room in his vision for art as connection, the desire to “do something that someone will relate to.” Carrey’s return to art came about, at least in part, through life’s pain. Through art, pain gets turned to purposes both creative and connective, culminating in a vision where the ultimate purpose of art is that of love. In his words, “We want to show ourselves and have that be accepted.”

This is an important reminder for Christians that all art should be engaged, on some level, as personal. That is, a person pours some piece of who they are into a work of art and so our engagement with art cannot be purely from a critical or technical standpoint, but must also respect the dignity of the one who produced this work. Now, I’m not saying we need to be naively positive or act as though technical excellence carries no weight in our judgment of art (Christians have been guilty of both, especially in regard to so-called “Christian” art). But I am saying that we can never totally separate the piece from the person, the art from the artist.

Carrey thus reminds us that art, like life, is ultimately about love. Maybe I’m wrong, but when Carrey talks about being seen, known, and accepted, I get the feeling that the mental picture I have of my Jim Carrey—i.e., Lloyd Christmas of Dumb and Dumber—was an act, an attempt by Carrey to gain acceptance apart from showing who he really is. So I appreciate Carrey’s vulnerability, his willingness to open up and share the truth—of pain, of joy, of life.

Perhaps that is something further that art can teach us about God, for just as artists make themselves both known and vulnerable through their creation, so we come to understand that God, the ultimate Artist, makes himself vulnerable when he creates. On a canvas that was dark and formless, he spoke color into existence. And when his creation turned its back on him, he didn't scrap it all and start over. He stuck with us, knowing full well that the consequences would lead him to the darkness of the cross. Indeed, Carrey’s paintings of Jesus allude to the healing presence of the Divine Artist entering into, identifying with, and healing creation. The vulnerability and passion of Christ for us is nothing less than a revelation of the very heart of God. Carrey’s own passion for art can thus serve as a reminder that we still need that creative and colorful Word spoken into our lives in a variety of mediums and ways. 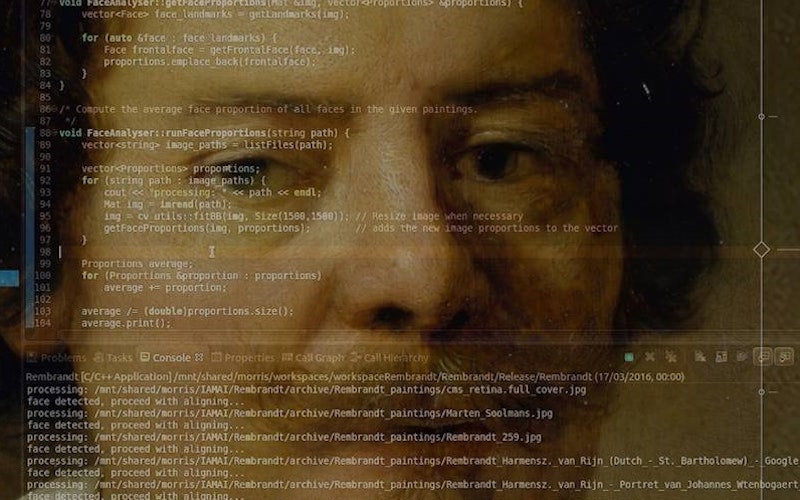 A "new" Rembrandt and the art of creation