Iron Maiden powers on with The Book of Souls, offering another heavy metal burst of lament.

Few bands have the legacy and longevity of Iron Maiden. Forty years and 16 studio albums in, the British sextet continues to prove that they’re one of the most hard-working and ambitious heavy metal acts around. And nothing shouts ambitious like a double-disc album.

As such, The Book of Souls stands out in Iron Maiden’s catalogue as a formal departure from their trademark, punchy bursts of metal. The prog aesthetic that used to punctuate their records now defines them, and the sound they began to develop on Brave New World feels like it’s reached its logical culmination. As far as these elements are concerned, the recording sounds great.

While The Book of Souls kicks off with a memorable anthem and signature, triple-guitar attack, it takes a sharp turn with “Speed of Light,” which sounds like a throwback B-side. In fact, most of the shorter tracks interrupt the record’s flow, as if to placate the fears of longtime fans that the band has evolved into a new beast.

But Iron Maiden succeeds in their longer musical explorations. “The Red and the Black” offers “Powerslave”-era riffing and singalong “whoa-oh’s.” The title cut is arguably the best song they’ve put out in the last 15 years. Though it lags at times, the final track can even draw tears with its mournful hook.

Many Christians, of course, associate Iron Maiden with their infamous record, The Number of the Beast, as well as with Eddie the Head, the band’s demonic-looking mascot. Indeed, consideration of the afterlife on this latest album is far more Mayan than Christian.

Metal is more than just mournful music; it’s a community for the mournful.

Yet The Book of Souls still has much to offer. “Empire of the Clouds” documents the crash of a British airship, while “Tears of a Clown” is an homage to Robin Williams. The title track chronicles the demise of the Mayan civilization. Even “If Eternity Should Fail” seems to lament the futile efforts of man to live forever. It’s that tone - the tone of lament - that is common in heavy metal, yet is also frequently the most misunderstood.

In their book, The Psalms as Christian Lament, Bruce Waltke, James Houston and Erika Moore point out the incongruity of lament within today’s Western culture: “The autonomous agent, who in self-sufficiency excels in all the gadgetry of the ‘Electronic Revolution,’ is reluctant to see him or herself as ‘despairing in absolute need.’”

Such self-assuredness, which has no room for lament, only leads to depression and stress. In many ways, heavy metal offers the communal outlet that we so desperately need. A 2013 article in the Wall Street Journal observed that, “metal is a panacea for its followers, the only way to make sense of a chaotic, callous society in which they don’t fit.”

Metal is more than just a mournful style of music; it’s a community for the mournful. Like Job’s friends, who initially sat quietly with him in solidarity, metalheads don’t ask questions as they thrash around together at shows. They simply express their mutual anguish in a public, communal way.

Not all metal promotes healthy catharsis, to be sure, but the genre as a whole groans with creation, screaming in dismay that this world is broken and in need of repair. Iron Maiden deserves praise for publicly declaring their fatalistic fears - fears with which even hopeful Christians struggle. 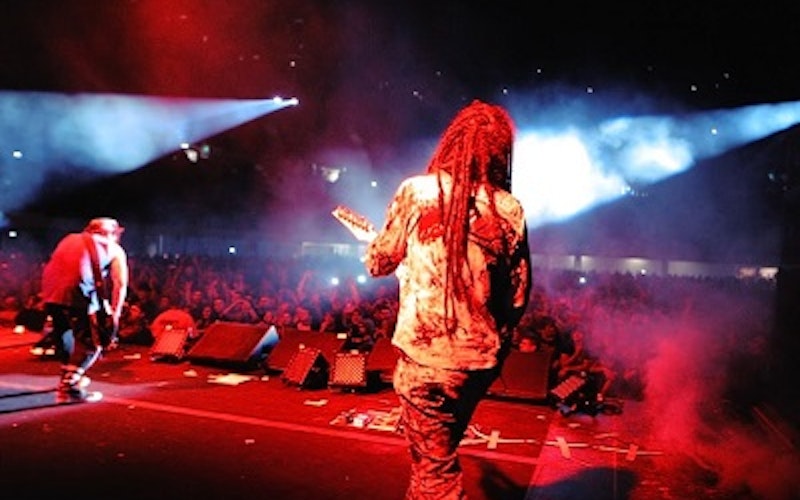 Holy Ghost and the latest step in Korn’s spiritual journey