Before it takes a second-half turn to become a Hitchcockian psychological thriller, Phantom Thread lushly envisions what it’s like to be a beloved creature in the hands of an extravagant creator. The movie’s central relationship is between a dressmaker and his latest model/muse, and at least in the first flush of their time together—before he turns demeaning and controlling and she devises a plot to set him straight—there are reflections of God’s design for us.

Indeed, at the movie’s start we seem to be in heaven. Reynolds Woodcock (Daniel Day-Lewis) runs one of the preeminent design houses in 1950s London, and in the opening scene—set to Jonny Greenwood’s robust piano score—director Paul Thomas Anderson’s camera floats up the mansion’s stairwells and down its staircases, all while models and seamstresses bustle about, performing everyday pirouettes. Each move, you sense, has been preordained, if not actively conducted, by Reynolds, who strides through his airy, brightly lit home with an attentive eye to the smallest detail. His words of approval, whether they’re regarding a fabric choice or the cream served at breakfast, echo those in Genesis: “Very good.”

The latest angel to enter this realm (for we soon learn that Reynolds has a regular rotation of relationships) is Alma (Vicky Krieps), a waitress he meets during a trip to the country. Although he is bossy right from the start, even wiping off her lipstick on their first date, he also draws out of her a newfound confidence and elegance, especially when she dons one of his dresses. Deeply attuned to her as an individual—taking precise measurements of her body, holding various fabric samples against her shoulder to see which best compliments her skin—Reynolds wraps Alma in material that doesn’t necessarily improve her, but rather seems to reveal her truer self. When Alma models a rose gown featuring centuries-old lace and an airy train that encircles her, she is transformed into something glorious. (Mark Bridges, the film’s costume designer, deservedly received one of Phantom Thread’s six Oscar nominations.)

God, of course, gave us a greater gift than a beautiful dress. He designed an entire world for us, one whose vast beauty and diversity we are intended to both steward and enjoy. Clothing didn’t come into the picture until the fig leaves of the Fall, and while fashion has been a mixed bag ever since—with highs (saddle shoes) and lows (Uggs)—it still serves as a handy metaphor for what spiritually ails us: apart from God we feel naked, and long to return to that perfect fit.

Reynolds' words of approval echo those in Genesis: “Very good.”

Which brings us to Phantom Thread’s most thematically resonant dress. About midway through the film, Reynolds holds a private showing in his mansion, during which various models display his latest designs to clients. At one point Alma appears in a relatively demure, deep red dress that—save for another extravagant splash of lace along the neckline and skirt—is reminiscent of the waitress uniform she wore when they first met. She comes alive here, spinning and smiling, and the suggestion is that Reynolds has taken who Alma was and formed her into the Alma she was meant to be. The first time we see Alma at the restaurant she trips and nearly falls; here, in Reynold’s design, she glides with grace. He’s returned her to Eden or, more eschatologically, dressed her for the new creation, where all things will be made right.

In Not the Way It’s Supposed to Be, Cornelius Plantinga offers a biblical vision of the world as broken by sin, aching to be restored. On that day of renewal, he writes, “God would preside in the unspeakable beauty for which human beings long and in the mystery of holiness that draws human worship like a magnet. In turn, each human being would reflect and color the light of God’s presence out of the inimitable resources of his or her own character and essence.”

That’s a lovely picture of a good and giving God, and certainly there is no way Reynolds Woodcock can live up to it. Nor is he meant to. Indeed, one of Phantom Thread’s pleasures is the way it deconstructs the egomania that runs through the artist-as-god trope. By allowing Alma to take the reins via that Hitchcockian turn, the movie becomes an act of confession/repentance on the part of its own creator (Anderson), as well as an acknowledgement that as fallen human beings we are unable to sustain such creative goodness.

Yet even as we note the complications that come into play in Phantom Thread, we can still enjoy those early moments of the movie where we’re awash in the eschatological hope of Reynold’s dresses. It reminds me of Ginger Rogers’ gowns in her pictures with Fred Astaire, which would always come alive in a new way during the dance sequences. As Fred twirls Ginger during the climactic number of Top Hat, set to Irving Berlin’s “Cheek to Cheek,” her dress’ feathers ripple through the air as they were designed to do. I can imagine Reynolds Woodcock watching them and sighing, “Very good.” 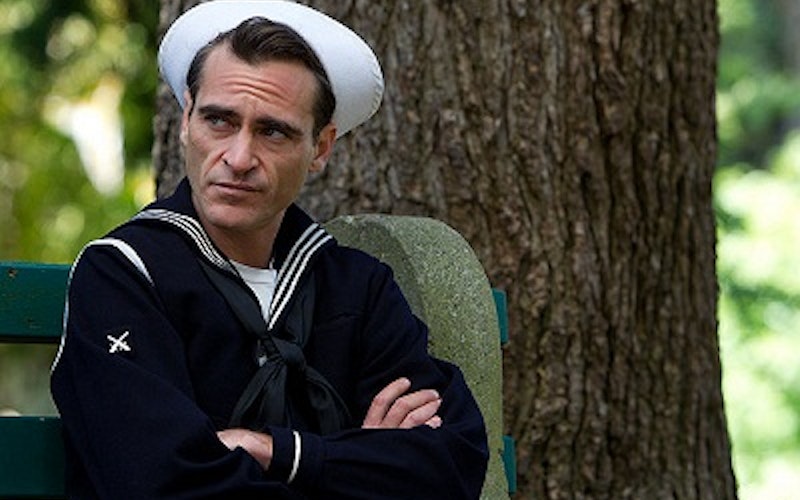 The Master and the Agony of Belief