Like a contemplative prayer, Lady Bird encourages us to return to the familiar with renewed appreciation.

One of the oldest forms of prayer in the Christian tradition is lectio divina. The practice invites you to read a text three times, each time looking and listening for where Christ is speaking to you. It is about returning again and again to the same experience, seeking the truth within it. In Lady Bird, which received five Oscar nominations including Best Picture, writer-director Greta Gerwig invites us to a similar kind of contemplation, searching for beauty and meaning in the seemingly mundane elements of adolescent life.

After years in front of the camera, Gerwig brings a personal and loving story to the screen in her first feature as director. Lady Bird is a coming-of-age story about Christine “Lady Bird” McPherson, a senior at an all-girls Catholic high school in Sacramento, Calif. Lady Bird (Saoirse Ronan) spends much of the film complaining about life in the city. At one point she even asks a classmate, “Do you think I look like I come from Sacramento?” She puts a lot of energy into getting out of Sacramento and going to college on the east coast, a desire that strains her relationships, especially with her mother (Laurie Metcalf).

Three of the most meaningful moments in the film take place in cars. In the opening scenes, Lady Bird and her mother are driving back home and listening to the end of The Grapes of Wrath on tape, crying. As the story finishes, Lady Bird turns on the radio, but her mother turns it off and asks her just to sit in that moment. This sets up a key theme of the film: attentiveness. Lady Bird always wants to jump to the next thing. They begin to argue about Lady Bird’s desire to leave California. As the argument gets heated, Lady Bird opens the door and falls out of the car. She would rather jump out of a moving vehicle than deal with her mother in that moment.

Later in the film, Lady Bird’s boyfriend betrays her and breaks her heart. Immediately she finds her best friend Julie (Beanie Feldstein) and they cry together in a car listening to Dave Matthews Band's “Crash Into Me.” In this moment the car becomes a sanctuary and a cheesy song becomes a sacred hymn. Gerwig contributes to the transcendence of the moment by placing the camera above the two girls as though we are looking at them through God’s eyes. Here, Lady Bird, Julie, and the audience all get to sit in that moment and be attentive to the experience.

Lady Bird searches for beauty and meaning in the seemingly mundane elements of adolescent life.

Another example comes from the end of the film, so spoilers ahead. Calling her mother from college, Lady Bird remembers driving on her own for the first time. She reflects on how driving through Sacramento while behind the wheel helped her to see everything with new eyes. Familiar roads, bridges, and buildings took on new significance. In a flashback, we see her from the passenger seat, beams of light shining through trees and filling the town with beauty. Even her tumultuous relationship with her mother becomes transformed in this moment as she finally appreciates the life she had.

At the core of this film is the experience of return—returning to something familiar with new eyes and a new appreciation for what is. At the end of Luke’s Gospel something similar happens. After Jesus’ death and resurrection, two disciples on the road to Emmaus encounter a stranger. He breaks open Scripture for them and then breaks bread in a familiar way. As soon as they recognize him as the risen Christ, he vanishes. When they experience this ritual “their eyes were opened” and they express to each other, “Were not our hearts burning within us?” Like these disciples, Lady Bird is too caught up in frustration and angst to see what was right in front of her. Only in the recollection and ritual, in the experience of the car both as passenger and driver, is she truly attentive.

At one point a teacher suggests to Lady Bird that attention and love might be the same thing. Though not strictly autobiographical, the film reflects Gerwig’s own experiences growing up in Sacramento. Her affection for her hometown comes through in the care and attention she gives to the locations, the homes, even the idiosyncrasies of a Catholic high school. In many ways, this film feels like a sacred reading, a second or third pass over memories, drawing out, in every moment, the beauty and truth of her life from that time.

In Lady Bird, Gerwig invites us to examine our own lives as well. When we take the time to be attentive, our eyes might be open so we can see that Christ was present to us in small moments of both joy and pain. Like Lady Bird or the disciples en route to Emmaus, we might just discover those moments when our hearts were burning. 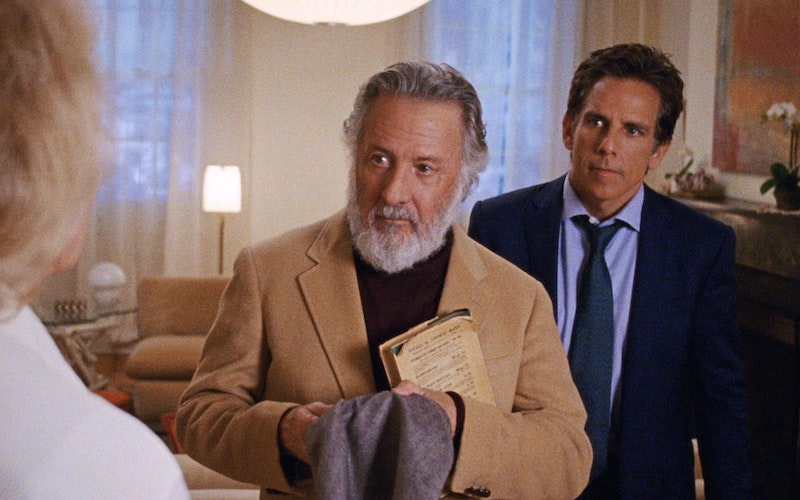 The Dysfunctional Idolatry of The Meyerowitz Stories